Adult Pirate Pak Day is on at White Spot today 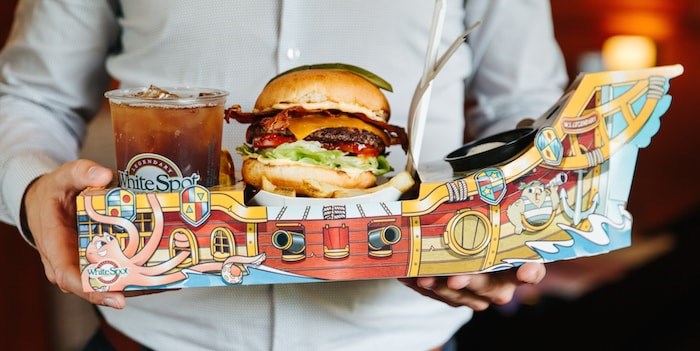 Today is an “all hands on deck” day for kids and kids at heart as White Spot brings back their special annual fundraiser. Pirate Pak Day takes place at White Spot locations across B.C. today, Wednesday, Aug. 14, 2019.

For this one day only, grownups can also enjoy the combo platter served in a cute cardboard boat, and it’s all for a terrific cause. That’s because for every adult and kid Pirate Pak (and select entrees) sold that day, White Spot will make a $2 donation to the Zajac Ranch for Children.

It’s the 10th anniversary of Pirate Pak Day – the fundraiser has raised $780,776 since its inception and has sent more than 400 children to the fully-inclusive summer camp, Zajac Ranch, where everything is accessible for children with life-threatening illnesses and chronic disabilities.

“Pirate Pak Day is a fundraiser that both guests and staff look forward to every year,” says White Spot President Warren Erhart. “It not only lets adults be a kid again and relive those trips to White Spot to enjoy a Pirate Pak, it also allows us to send very deserving children to camp so they can make memories of their own as well.”

On August 14, Pirate Paks are available for both dine-in and take-out. Adults can customize their Pirate Paks and veer off course from the kids’ menu, subbing in the traditional Legendary Burger for any of the following items:

We all know the Pirate Pak – that iconic cardboard boat holding a main dish and a side and that cherished doubloon (aka a gold chocolate coin), served with a soft drink and a scoop of ice cream for dessert. The Pirate Pak has been around for decades, delighting young White Spot diners since its inception in 1968, when founder Nat Bailey wanted “to provide a unique dining experience for children aged 10 and under,” according to the restaurant.

Over 24 million Pirate Paks have been sold at White Spot restaurants since 1968, including nearly a million in 2018, and 53,719 alone on Pirate Pak Day last year.