After seven-year sailing odyssey, family heads back to B.C. 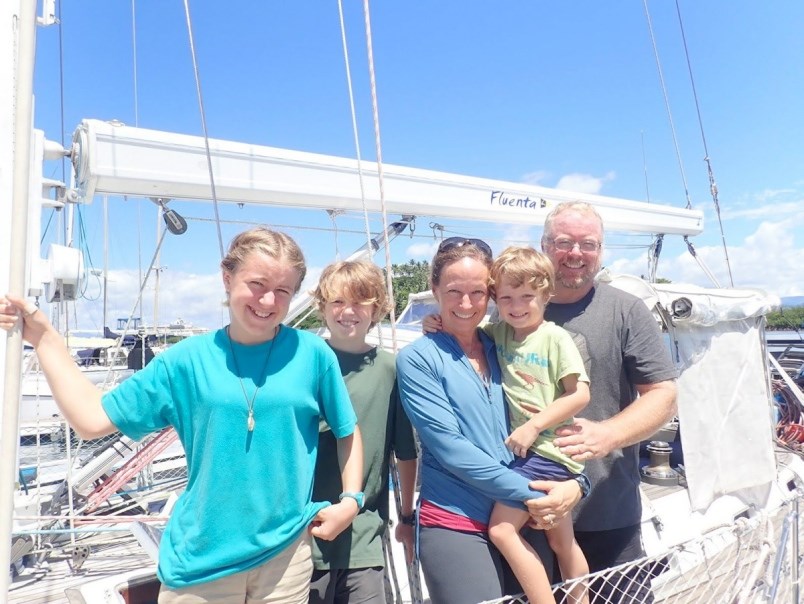 The Shaw family (from left to right: Victoria, Johnathan, Elizabeth, Benjamin and Max) pose on the SV Fluenta before heading to the Marshall Islands in December 2018.( via Shaw family)

As the Shaw family’s seven-year sailing adventure in the Pacific Ocean draws to a close, they’re looking forward to a new life in Victoria and some big changes.

The three kids, Victoria, 16, Johnathan, 13, and Benjamin, 5, are excited about going to a “bricks-and-mortar” school and making friends they won’t have to say goodbye to any time soon. Dad Max Shaw is looking forward to re-entering the workforce.

But one thing that won’t change is where they’ll lay their heads at night.

The family of five plans to continue living on their 14-metre boat in the Sidney marina.

Max and Elizabeth Shaw left military jobs in Nova Scotia and set sail in 2012 with two kids in tow — Victoria, then 8, and Johnathan, who was 6 at the time. They spent a year and a half working on their boat, the SV Fluenta, in Mexico, where Benjamin was born.

Three months after Benjamin arrived, the Shaws left Mexico and headed for the South Pacific.

“We spent about five years either in the South Pacific or Micronesia, and this summer we’ve sailed from Micronesia up to Dutch Harbor and the Aleutian Islands of Alaska,” Max said.

The adventure all started with a snow storm, a glass of wine and a playful game of one-upmanship.

Over some wine during a winter storm in Halifax, the couple started making plans to move back to Victoria, where they had previously been posted for work for two years. They started throwing out ideas, like buying a boat and sailing back to the West Coast.

They’re on the final leg of their journey now, sailing from Alaska to Victoria, where they plan to arrive in November.

“We’ve enjoyed the adventure of new places, and new people and new everything. But I think after seven years, it’ll be nice to be in the same location for a while,” Max said.

Alaska is the first place with a colder climate that they’ve visited by boat, so the family had to invest in a new wardrobe for the weather.

“Our friends in Canada are laughing as they’re seeing us put on all the layers where most of our wardrobe has been shorts and T-shirts for the last few years,” Max said.

Life on the boat has meant a slower pace and more time together as a family — a lot more. Max and Elizabeth share one cabin on the boat with Benjamin, and the two teenagers share another cabin.

“It’s meant we’ve gotten to actually live as a family. With our busy lives before as two professionals, you know, we hardly saw our children,” Max said.

They all work together to make the boat run, and when there’s friction, there’s nowhere else to go.

“Our survival depends on us working together, which is quite relentless. So we need to be constantly working as a team to ensure our safety and our happiness,” Max said.

The couple used their savings and the money they made by selling their house to buy the SV Fluenta. Their military pensions funded the last seven years of adventure.

The Shaws plan to stick around in Victoria until the older two kids finish high school.

And then, they’re not sure what’s next.

“There’s always the option of doing another lap with the boat,” Max said.

The family will be sharing their story at the Vancouver International Boat Show in February.

Make sure the mask is fitted, says SFU researcher
Jul 11, 2020 9:05 AM
Comments
We welcome your feedback and encourage you to share your thoughts. We ask that you be respectful of others and their points of view, refrain from personal attacks and stay on topic. To learn about our commenting policies and how we moderate, please read our Community Guidelines.