Another pipeline, another standoff 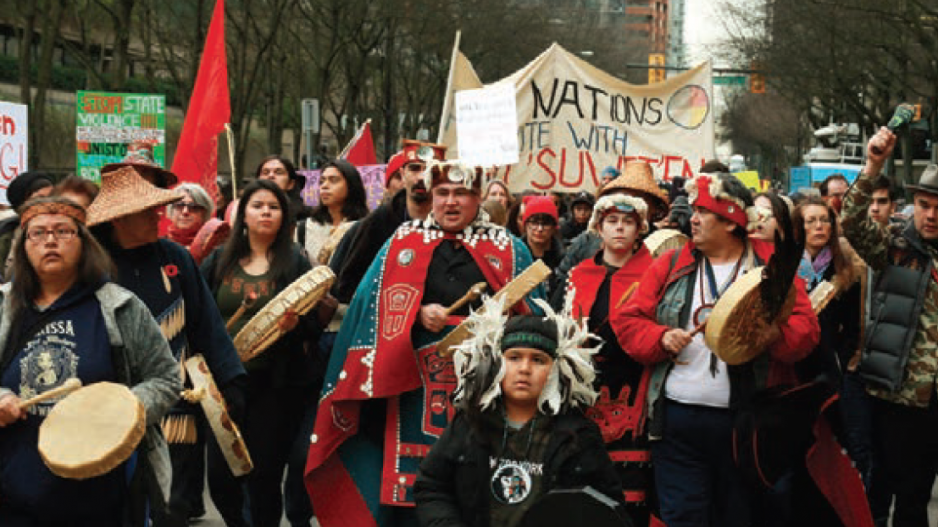 Last week’s arrest of 14 protesters, including members of the Wet’suwet’en First Nation, over the Coastal GasLink pipeline sparked a series of demonstrations of support for the protesters across Canada.

And it has again raised the thorny question: Who is the rightful representative of a given First Nation in B.C. – hereditary chiefs or elected ones?

As with the now-defunct Pacific NorthWest LNG project – which was supported by the elected Lax Kw’alaams Band council but was opposed by a Lax Kw’alaams member claiming to be a hereditary chief who had the support of his people (a claim later found by the courts to be unsupported) – the pipeline project has underscored a rift between Wet’suwet’en members, with elected band councils supporting it and some hereditary chiefs opposing it.

The $6.2 billion Coastal GasLink pipeline is a critical part of the $40 billion LNG Canada project.

The project has the support of “100% of the elected Indigenous bands” along the pipeline route, according to TransCanada Corp.(TSX:TRP).

TransCanada and the provincial government have signed benefits agreements with 20 elected band councils, including those of the Wet’suwet’en First Nation and other Wet’suwet’en bands, such as the Burns Lake Band.

But a clan of the Wet’suwet’en, the Unist’ot’en, is opposed to the pipeline. Its members have occupied an area near Houston and blockaded the Morice River Bridge for about a decade.

More recently another clan group, the Gidimt’en, joined the blockade. In mid-December, the BC Supreme Court issued an injunction against the blockade, and on January 7, the RCMPenforced it and arrested 14 people. Late last week, hereditary chiefs struck an agreement with the RCMP to allow workers into the area.

The politics and leadership of the Wet’suwet’en are complex, and there is division within the nation over the Coastal GasLink pipeline.

Elected band councils within the Wet’suwet’en are among the 20 band councils that have signed more than $600 million worth of benefits agreements in support of the pipeline project.

Although the Union of British Columbia Indian Chiefs (UBCIC) represents elected chiefs and councils, it has sided with the hereditary chiefs in the standoff over the Coastal GasLink project.

“Indian band councils have power, authority and jurisdiction over the reserve land base,” Phillip said. “We also know that the Tsilhqot’in case that went to the Supreme Court of Canada said very clearly that our Aboriginal title and rights interests are territorial-wide in nature.”

Nor does it really matter from a legal perspective, said Robin Junger, an expert on Aboriginal and environmental law with McMillan LLP.

Regardless of who represents the Wet’suwet’en, it’s illegal to block a provincial pipeline project and public roads, he said.

He agreed that the elected band councils generally have authority only over reserve lands. But they can represent the wider nation outside reserve lands on rights and title issues, if the First Nation at large has invested them with that authority.

In rights and title issues, either hereditary chiefs or elected band councils can represent their people, he said.

“The case of a community that’s government both by the Indian Actand has hereditary systems, it may well be the case that that First Nation has decided that its hereditary leaders will represent them on rights and title issues, not the band,” Junger said. “The band is a creature of the Indian Act. Under the Indian Act, it does only have power in relation to reserves.

“But if the First Nation itself has decided that it wants the band to represent it in relation to rights and title issues, then other parties will accept the band as doing so, but the First Nation will have to give it that authority.”

Even if it turns out that the Wet’suwet’en in general have invested authority in their hereditary chiefs, not elected band councils, it doesn’t alter the fact that the Coastal GasLink pipeline has been approved by the provincial government, Junger said.

“Even if you assume for a second that the agreement is invalid because the band had no authority whatsoever (to sign it), it still doesn’t mean the chiefs can blockade the pipeline or a public road. Nobody can.  No proper rights holder can legally block a road and defy a court injunction.”

Last week, Premier John Horgan said his government considers the benefits agreements that were signed to be valid and that they “include hereditary support.”