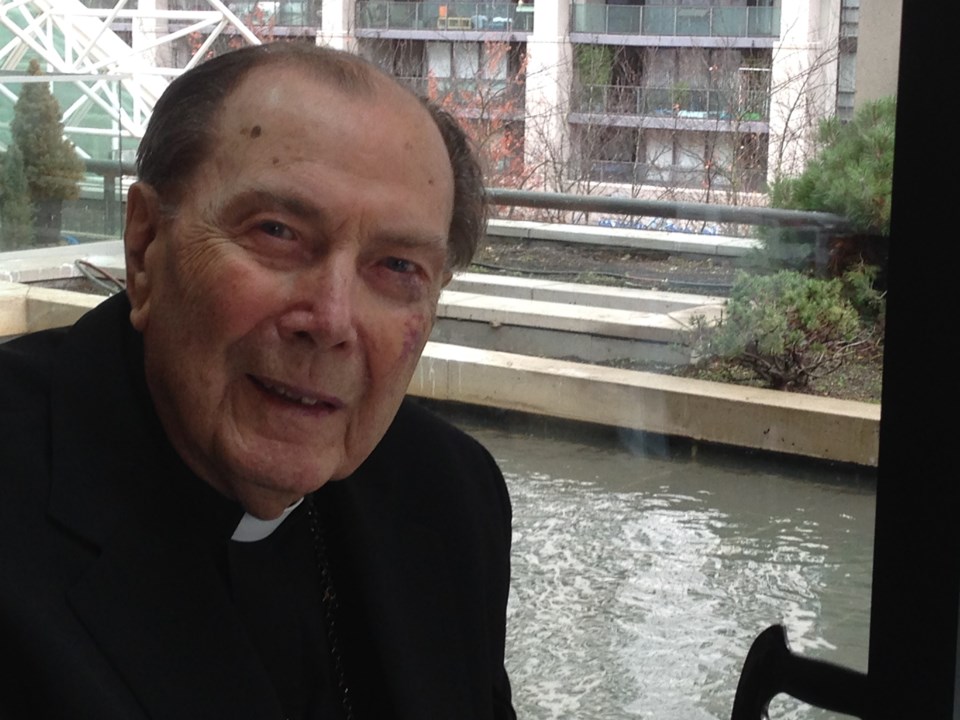 Kamloops Roman Catholic Archdiocese officials knew of the sexual activities of a priest before a school teacher reported her abuse at the man’s hands in 1977, the former bishop told B.C. Supreme Court Oct. 17.

“He was misbehaving,” testified Adam Exner, later archbishop of Winnipeg and Vancouver. “He was a playboy.”

Rosemary Anderson alleged in a Dec. 22, 2016, notice of civil claim the sexual abuse at the hands of Father Erlindo “Lindo” Molon, now 86, started when she was 26 when she sought solace after her father’s death. She names Molon and the Roman Catholic Bishop of the Diocese of Kamloops, A Corporation Sole in the claim.

Exner, 90, told Justice David Crossin he had been hearing rumours about Molon — all from parishioners, none from clergy.

And, he confirmed, diocesan minutes show there were personnel issues with Molon. “The same difficulties he always had,” Exner said.

Anderson testified last week she had sought help from Molon in dealing with grief from her father’s death in 1976 but instead found herself being groped by him in his office.

He comforted her but, she said, as she made to leave his office, “he embraced me, then began fondling me,” she said. “He shoved his ugly tongue in my mouth. I hated it. I prayed to God to stop it.”

“I felt fear. I felt disgust,” she said. “I felt completely helpless.”

Then, she said, Molon took her hand and led her into the adjoining bedroom where they had intercourse.

Eventually, she said, Molon suggested marriage. At that point in early 1977, she went to see Exner.

“She was upset because her relationship with Father Molon was going in a direction she did not want,” Exner said. “There was a sexual component to it.”

And, he agreed Anderson was vulnerable.

“I think I let her know she’s not the only one. He’s promiscuous,” he said.

“He would have taken advantage of her even more if she were his wife.”

With Anderson, though, the Molon situation was no longer just rumours. There were now accusations.

“That meeting with Rosemary Anderson was when I hit pay dirt,” Exner said.

The court has heard Anderson went to Exner with her concerns about Molon.

While Anderson has testified Exner told her Molon could not get married and then asked her if she had been having an affair with her confessor, Exner said he advised her against marriage.

But, he added, Anderson’s information was what he needed to act on disciplining Molon.

Soon after, he suspended Molon, removing his abilities to act as a priest.

“He was misbehaving and he was refusing to take any measures to improve himself,” Exner testified.

Exner said he encouraged Molon to go to a treatment centre that assisted clergy with alcohol or sexual issues.

“I tried to get him some professional help, to get him to straighten out,” Exner said. “I tried very hard.”

Exner also testified he knew some of the women Molon was involved with were married.

But, he expressed a lack of knowledge of Roman Catholic church law — or canon law — about sexual involvements of priests. He said he did not have a canon lawyer available to him.

Anderson’s lawyer Sandra Kovacs asked Exner if Molon was a predator rather than a playboy.

“I don’t see how I can draw a line between the two,” Exner responded. “A bit of both.

“What he was doing was morally wrong, and that’s the first concern.”

Kovacs asked him if he knew as early as 1975 that Molon was sexually involved with parishioners.

Exner said the reaction to relieving Molon of his duties in 1977 from parishioners who loved Molon was hard. He said there was “a lot of blast from the people who were not happy about that.”

He said people thought he was being unfair for punishing Molon for one transgression.

“They thought I was doing it for one isolated mistake,” Exner said. “It was a multitude of things.”

But, he said, he could not warn people.

Exner said he did not remove the priest in person. Rather, he said, he did it by letter. But, not knowing where Molon was in Kamloops, he gave the letter to a parishioner who delivered it to Molon personally.

Exner also wrote a statement that he delivered in church about removing Molon.

“It took a lot of courage to get up and give a talk like that in church but I had to do it.”

Most times, the assault occurred in Molon’s quarters but also in a room between common areas and at her apartment.

Anderson said she eventually began discussing it at confession, fearing if she did not, she would go to hell.  She did this repeatedly — 40 to 50 times. She said her confessor eventually told her she need not keep confessing to it, that she could still take communion.

Kovacs told the court Molon misused his position of power and trust in the alleged assaults in 1976 and 1977.

The lawyer said an option presented to Molon was moving to another parish.

“But I knew if I sent him to another parish I could expect in due time to have a similar problem there,” Exner said.

“He was probably going to do the same thing elsewhere because he was not learning anything.”

Exner became frustrated at times, repeatedly being unable to recall events from the Seventies.

And, in one startling response, he said he had not wanted to be a bishop.

Kamloops sexual assault case involving former priest starts in Vancouver
Oct 7, 2019 2:27 PM
Comments
We welcome your feedback and encourage you to share your thoughts. We ask that you be respectful of others and their points of view, refrain from personal attacks and stay on topic. To learn about our commenting policies and how we moderate, please read our Community Guidelines.