At 106, Norman Gill is one of Canada's oldest WWII vets 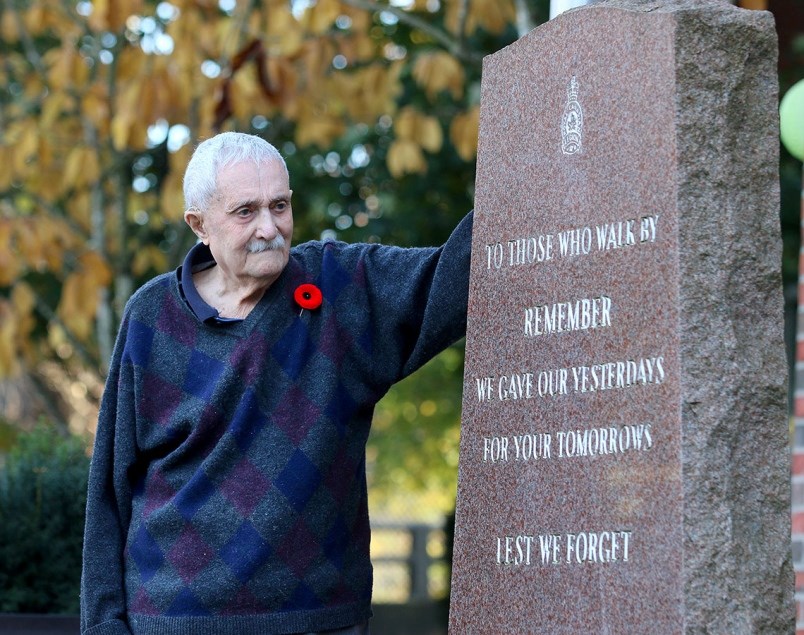 Norman Gill can be excused if his memory is a bit fuzzy.

At 106, the Port Coquitlam resident is one of the country’s oldest war heroes, having served for nearly three decades with the Royal Canadian Horse Artillery and the Royal Canadian Air Force until his retirement on April 30, 1962.

Still, his recollection of his time in the military remains vivid and is especially in tune as Remembrance Day approaches.

Born outside of Winnipeg in 1913, Gill said he was 19 when he enlisted for one of two spots open with the area horse brigade; at the time, he was told he wasn’t tall enough to join the Princess Patricia’s Canadian Light Infantry.

With jobs scarce at the time and Canada’s economy on the downturn, Gill said he also sought to sign up to follow in the footsteps of his father, a veteran of the Second Boer War.

Assigned as a gunner and driver, Gill was paid 20 cents a day — plus an additional 5 cents if he was at camp — by the army. He enjoyed his time in the brigade, he said, even taking the title of boxing champ at the garrison in 1935.

Gill still has the small brown trophy as well as large photos of his unit parading down Main Street in Winnipeg in 1934, and him in uniform on a horse with his fellow army troops.

But Gill left the brigade in February 1936 — “just after the death of King George V,” he recalled — and joined the reserves for a year before enlisting with the Royal Canadian Air Force, which he heard was expanding its signal corps.

He trained in communications at RCAF Station Trenton with the new torpedo bomber squadron — also known as No. 6 (Bomber Reconnaissance) Squadron — before it was moved to RCAF Station Jericho Beach in Vancouver, in late 1938.

During the Second World War, the squadron was mostly used in an anti-submarine role with the Western Air Command that flew from Jericho Beach to Coal Harbour on Vancouver Island.

As flight sergeant, Gill said, he was in charge of making sure the radio gear was sound at the new station's opening on the West Coast. The theatre overseas was on his mind regularly.

“Every day, I thought I would be sent over,” he said.

He never got a posting to Europe or the Pacific. Instead, he was dispatched to various stations on Vancouver Island to watch for enemy marine craft and to keep the radio equipment in top-notch condition. “We were repairing stuff they should have thrown away."

After the war, Gill was in charge of the repair depot in Nova Scotia before he retired as a First Class Warrant Officer.

His grey wool uniform from 1960 — complete with its standard shirt, tie and hat — now hangs in his closet. “I can’t get into it,” Gill said with a chuckle. “No need to.”

Now living at the R.J. Kent: The Residences at PoCo Legion, the retired social worker remains independent and, on Friday mornings, he can be seen walking through downtown PoCo to fetch his groceries at Freshmart; he also prepares his own meals.

No matter, the father of two said, as he no longer takes part in Legion events next door nor in Remembrance parades.

As for his age, Gill is blunt: “If my time is up tomorrow, I wouldn’t care. I just don’t want to end up in the hospital."