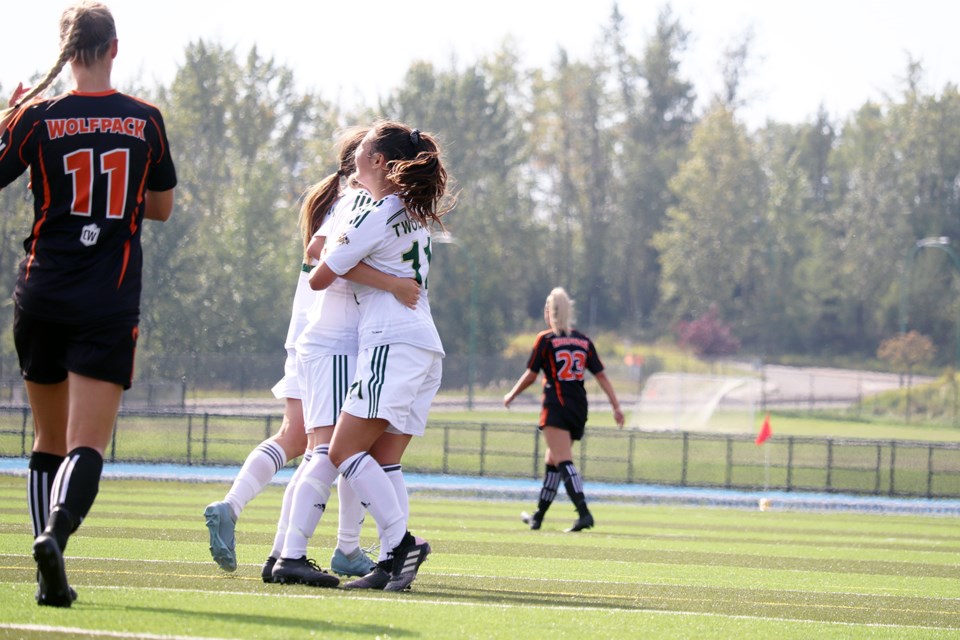 The UNBC women's soccer team kicked off their 2019-20 season this afternoon (Aug. 5) at Masich Place Stadium, shutting out the Thompson Rivers University WolfPack (TRU) by a score of 1-0.

.@UNBCATHLETICS @UNBCWSoccer win their season as well as home opener against @GoTRUWolfPack this afternoon. Paige Payne picked up right where she left off after her historic year last year, netting a beauty to give the Timberwolves the 1-0 win #runasone #cityofpg #canadawest pic.twitter.com/CzVHok2ZnR

Of course, most eyes were on UNBC's Paige Payne.

The T-Wolves midfielder was named a Canada West Second Team All-Star last season after setting a UNBC record in points in a single season with 12 (eight goals and four assists).

She didn't disappoint on this afternoon (Sept. 5).

Payne was a thorn in the WolfPack's side, having numerous scoring chances after getting behind the back defensive line of TRU and using her skills to beat out player after player.

In the fifth minute, she got behind the back-line of the WolfPack, having a glorious chance but was denied by TRU keeper Danielle Robertson.

Her tenacity paid off as she would net a beautiful goal in the 10th minute to give the Timberwolves a 1-0 lead in the first half.

“We knew they were a physical team, so we wanted to play direct and see where it would get us,” Payne said postgame in a release. “It ended up working out. We have a lot of speedy strikers up front, and a lot of players who can hit those long balls. We were able to keep possession, and the team effort came together really well.”

The score held up going into the locker room at the half.

In the second half, UNBC would continue to dominate possession with their speed and in the 78th minute, another glorious opportunity came their way when Julia Babicz broke down the left side and shot a ball 20 yards out, which hammered off of the crossbar.

TRU would have a chance to tie the game at one in the 90th when UNBC turned the ball over which gave Chantal Gammie a chance at the top of the box but was denied by Timberwolves keeper Brooke Molby.

With that, UNBC held on and won their season opener, ending the game with 18 shots to TRU's eight, with 10 of them going on net for the Timberwolves and 6 for the WolfPack.

PP7! The Pride of Kitimat, @PaigePayne74 talks postgame about her @UNBCWSoccer team's 1-0 victory over the @GoTRUWolfPack! Recap and highlights on the way! #PP7 #gotwolves pic.twitter.com/TlmJGqcFb9

“We were excited to come in and play these guys,” TRU keeper Danielle Robertson said in the release postgame. “We have to play them twice, so we will be definitely looking for points and results next time. It gives us something to work towards.”

The Timberwolves are back at it again this weekend on Saturday (Sept. 7) against the UBC Okanagan Heat at Masich Place Stadium at noon.