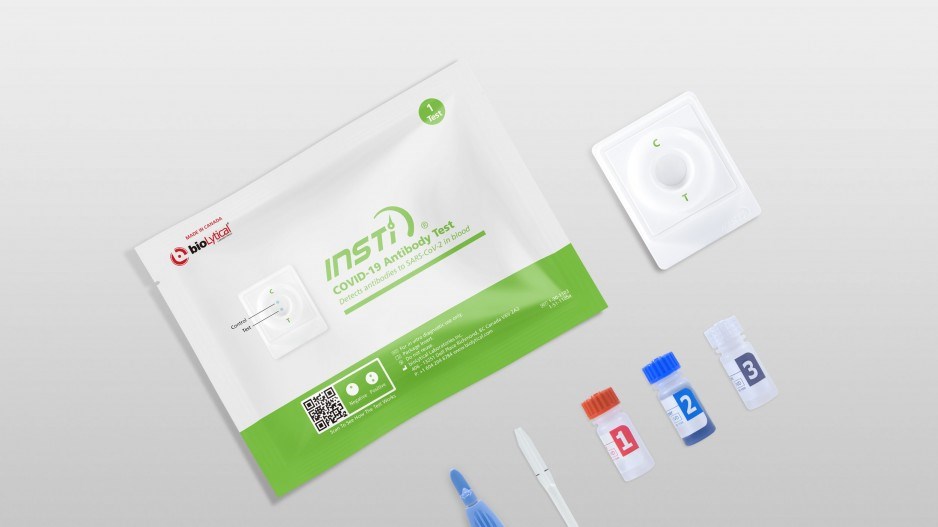 A Richmond-based biotech firm is developing a one-minute COVID-19 tes. (via Submitted)

The company is now in the midst of porting that expertise into the realm of COVID-19 with funding from the National Research Council of Canada Industrial Research Assistance Program (IRAP) announced yesterday (May 27).

Michelle Zaharik, bioLytical’s chief scientific officer, told Glacier Media the goal is to rapidly test as many people as possible as quickly possible.

“We have so much experience with this [INSTI] platform and we know how accurate it can be, we know how simple and easy-to-use it can be. It was a natural fit,” she said, referring to the company’s experience developing the HIV test.

“With the benefit of this federal funding, we can continue to move forward with the development process.”

The one-minute COVID-19 test is meant to become an adjunct to lab testing rather than replace lab testing, allowing for more initiatives such as mass screenings.

Because the antibody test relies on collecting a finger-prick’s worth of blood, subjects don’t need to remove any face masks they might be wearing as would be the case if it were a swab-based test.

“This one-minute test format — besides getting your [test results] so quickly — that reduces the amount of contact time between you and the individual you’d be interacting with,” Zaharik said.

The company’s HIV test has been given the nod from Health Canada, the U.S. Food and Drug Administration and regulators in Europe, while bioLytical touts an accuracy of more than 99 per cent.

Zaharik said she cannot comment on the COVID-19 test’s accuracy while it’s still under development “but we have done some very careful thinking and consideration into the choice of the proteins” that are going to be used for the targets of the test.

“If you have antibodies to the target, you have to bind within 15 seconds,” Zaharik said.

“And that really means that you are detecting antibodies when they’re there because they will be able to bind quickly.”

While some might raise concerns about the specificity of the test if a subject potentially has the antibodies to a related illness, Zaharik said those antibodies don’t usually bind very quickly.

Meanwhile, the chief science officer added she’s hopeful the test can be approved and distributed within the next two to three months.

While the HIV test is commercially available for home use, Zaharik said she does not expect regulatory bodies to be in favour of home-use tests for COVID-19.

Instead, the company will be targeting public health agencies as customers.