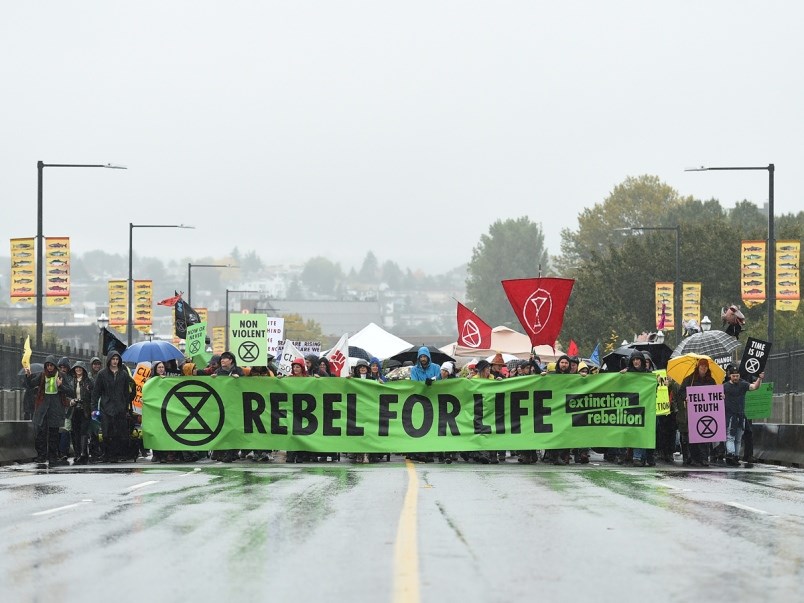 The protest group Extinction Rebellion closed the Burrard Bridge Monday morning to vehicle traffic and planned to be there all day. (via Glacier Media)

Monday’s protest in Vancouver and closure of the Burrard Bridge won’t be the last.

Not only that, but protest organizers vow to stay on the bridge until midnight.

Between 100 and 200 people convened on the centre span of the bridge Monday morning amid signs that read “Seas are rising, so are we” and “Change or die.”

“In this great turning we shall learn to lead in love,” protesters sang.

The group behind Monday’s protest, Extinction Rebellion, say they are rebelling against the Canadian government to force measureable action on climate change.

“Everyone here is terrified about for their future,” said volunteer organizer Laura Fash. “The reason we’re causing disruption is because we’ve tried everything else. We’ve tried campaigns, we’ve tried voting, we’ve tried leaflets and petitions and nothing has worked. This is a crisis.”

Fash is a 25-year-old recent graduate from UBC, where she studied biology and philosophy. She’s unsure of where her career path will take her and attributes that uncertainty solely to climate change.

“This is a future of accelerating change that is nothing like the world my parents grew up in or institutions like UBC were built to prepare us for, so how do you begin to navigate that? How do you plot a future where there is no path set?” Fash asked.

She spoke to the Courier under a series of tarps, all of which required some form of plastic in the production chain. The vast majority of those on the bridge were wearing boots, windbreakers and water-repellant clothing and that required oil or plastic products.

Fash was asked how she reconciles this.

“This speaks to the systemic nature of the problem,” she said. “The oil and gas industry that is such an enormous piece of this is in every single piece of our lives and that’s why it’s so hard for us to break away from this. It’s like having an addiction problem.”

The Burrard Bridge carries approximately 55,000 vehicles, 13,000 transit passengers and 500 trucks on a typical day, according to a 2018 city staff report. The bridge sees 10,000 walking and cycling trips on a busy summer day.

Traffic on the nearby Granville Bridge seemed largely unaffected by Monday’s protest.

When asked what she’d say to annoyed commuters having to re-route around the bridge, Fash responded: “We are really sorry to those people in Vancouver. We’re just like you. We are also being disrupted by this. We don’t want to be here in the freezing cold rain, but we have to be because this is a crisis.”

Fellow Extinction Rebellion organizer Dana James spoke to the crowd from a series of prepared notes on her cellphone. She’s pushing for the federal government to immediately create a citizens’ assembly for climate and ecological justice and to implement solutions. James suggests the federal government is willfully lying to Canadians about the extent of climate change.

She and Fash hint at the fact that Monday’s protest won’t be the group’s last. It was organized by a core group of about 50 to 60 people over the summer months.

“Empirical evidence shows [protesting] is the most effective way to achieve the rapid political and economic change we need,” James said.

Vancouver police officers told the Courier they’re expecting to be on, or in the vicinity, of the bridge until midnight. No one from the protest group will say how long they plan to be there.

Joanne Gary is a bit of an outlier in the group. Most protesters appeared to be in their 20s, 30s and 40s, while Gary is 70. Others in her age group were largely absent from Monday’s protest.

“They are clearly not thinking about it,” Gary said. “It’s not polite conversation yet. They’re not seeing beyond their own noses.”

Gary drove in from Richmond to attend the protest, largely because her dog was with her. Gary wrestled with that decision, but says driving made the most sense logistically.

Gary is asked how a protest in Vancouver can affect real change among the globe’s foremost polluters: countries such as the U.S., China and India.

“I want people to see that this protest is along a continuum. Governments will register this. This is a prod. This isn’t an ask,” Gary said.

Alleged social media accounts surface for B.C. man charged with abusing hamsters
May 26, 2020 10:35 AM
Comments
We welcome your feedback and encourage you to share your thoughts. We ask that you be respectful of others and their points of view, refrain from personal attacks and stay on topic. To learn about our commenting policies and how we moderate, please read our Community Guidelines.