BC Conservation sounding the alarm after moose chased into wire fence dies of injuries, exhaustion 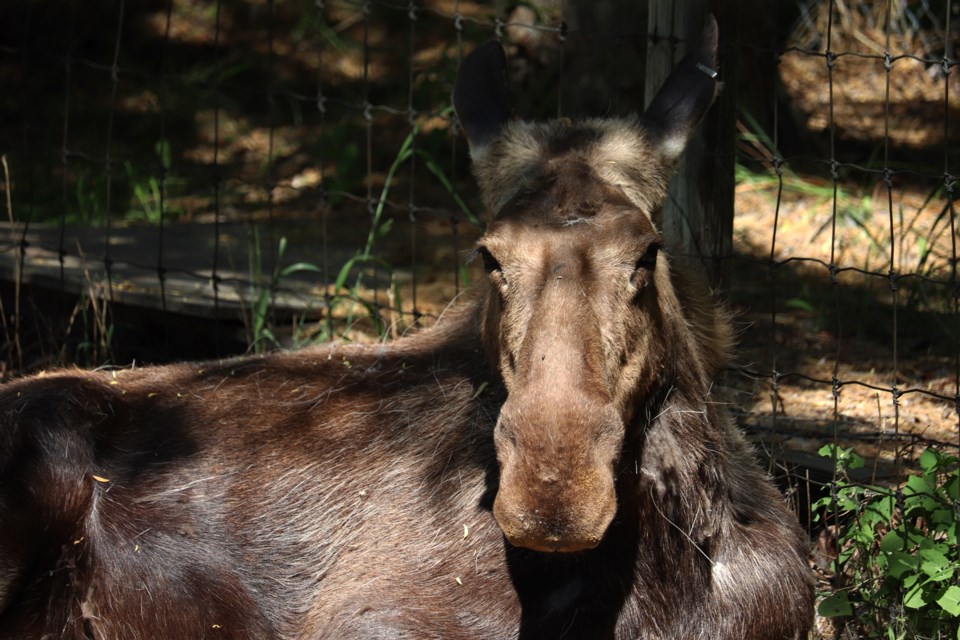 A moose at the B.C. Wildlife Park. (via Glacier Media)

BC Conservation officers are pleading with the public to keep dogs on leash after two tragic wildlife deaths resulting from dog chases.

Recently in Naramata, a dog chased and attacked a deer, causing injuries that likely resulted in a slow, painful death, according to conservation officer Mike Stern. The owner of the dog was fined $345.

Then on Tuesday evening around 9 p.m., also in Naramata, another attack left a healthy cow moose terrified and tangled in the wire of an orchard fence.

The moose was chased by a boxer-type dog with no owner nearby down a bank into the fence.

"The dog was grabbed by the landowner next door, we don't know whose dog it was. The dog ended up leaving the scene," Stern said.

Conservation officers arrived and cut the moose free, but tragically, the stress and exhaustion of the incident proved too much. The moose died overnight.

"People don't realize what kind of impact dogs have when they chase deer, moose, elk, what have you. It's a big problem."

Stern said out-of-control dogs are an issue "all year round."

"People walk their dogs, and they don't have control of their dogs. What happens is the dogs chase the deer, the owners can't call the dogs back, and it results in a pursuit and in some cases attacks," he explained.

Stern hopes dog owners will be responsible and keep their pets on leash if there is any chance they could chase wildlife. Allowing a dog to chase wildlife is illegal, and results in a minimum $345 fine which can increase to a court appearance and thousands of dollars in more fines.

Conservation officers are still investigating the death of the moose, and any information about the brindle-coloured boxer's potential owners is asked to be sent to the Report All Poachers and Polluters (RAPP) line at 1-877-952-7277.