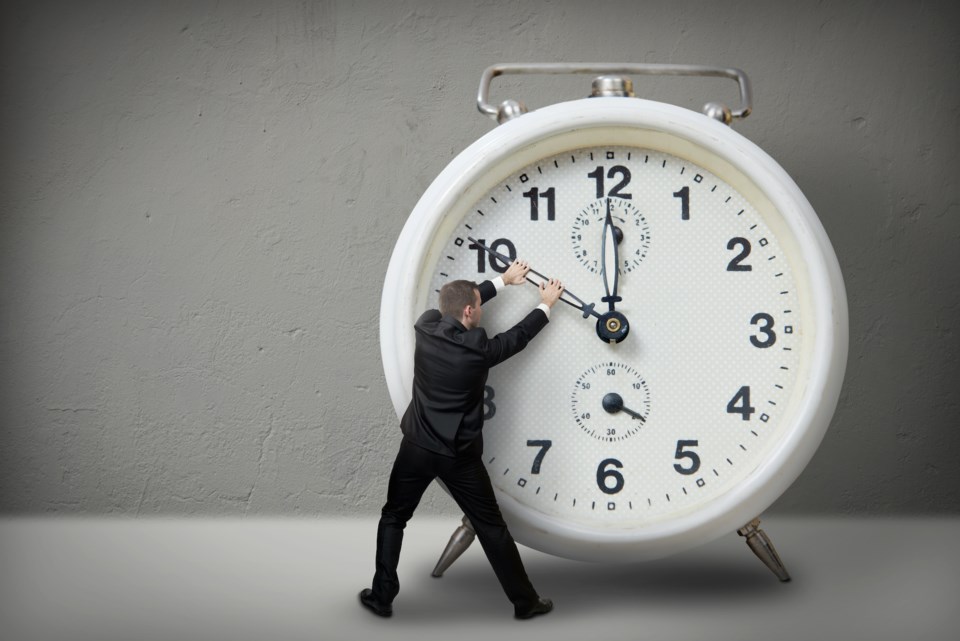 The B.C. government could introduce legislation this fall to mandate year-round daylight time, depending on what happens in the United States, B.C. Jobs Minister Bruce Ralston said Tuesday.

“On the B.C. side I think we will wait for the Americans to go first, but there has to be a change in legislation by the province,” said Ralston. “We don’t want to go out alone on this, so we will co-ordinate our efforts. We want to see what the American Congress does first, although it looks like it will go forward.”

On Tuesday, the province released a report showing 93 per cent of 220,000 people who answered a B.C. government survey think the province should move to year-round daylight time.

Seven per cent wanted to stick with the current system of time changes in spring and fall.

The government said it recognizes the importance of being in sync with Washington state, Oregon and California when it comes to business and trade.

The coming fall legislature session is only 20 days and there are many hurdles, so it would be “optimistic” to see legislation in the fall “but the government is convinced based on this consultation that there is strong public support for it,” Ralston said.

Support for year-round daylight time was consistent throughout B.C.

More than 90 per cent of respondents in each region supported year-round daylight time.

Of those in favour, 54 per cent agree B.C. should be aligned with neighbouring jurisdictions.

Linda Larson, B.C. Liberal MLA for Boundary-Similkameen, has introduced a private-members bill to keep the province on daylight time year-round.

Politicians in Washington, Oregon and California are creating or enacting legislation that, with federal approval, would see those states adopt year-round daylight time.

So far this year, at least 36 states have introduced legislation to end time changes, or study a permanent time, more than any year before, according to an NBC News report last month.

Some bills call for all-year standard time (Hawaii and Arizona are the two states that use standard time), but most endorse permanent daylight time.

In Washington, such a bill received Senate approval and Gov. Jay Inslee signed off on it in May, but because federal law only allows states to permanently adopt standard time, congressional approval for permanent daylight time is required.

There’s no time line on that, but U.S. President Donald Trump has said he wouldn’t stand in its way “although I suppose that could change,” Ralston noted.

From the perspective of trade and business, “one of the attributes we have and speak of when we talk about why B.C. is so attractive for Silicon Valley tech companies or the film industry is that we are in the same time zone so that becomes very very important, that that unity of time zone is preserved,” Ralston said.

He said it speaks to Premier John Horgan’s “political elbow” that he recognized this was an issue and ordered the time-change survey. The premier will meet with Yukon’s premier at the end of September, and he’ll be in Seattle in October when he will speak with Washington’s governor, Ralston said.

“The people of British Columbia have spoken and their collective voice has come through loudly and clearly,” Horgan said in a statement. “This engagement has done exactly as we hoped it would in providing clarity about a preferred direction.”

The government acknowledges the voluntary nature of the survey allows for a self-selection bias — people who want a change are more likely to participate.

Seventy-five per cent of those who prefer year-round daylight time identified health and wellness concerns as the main reason.

However, 74 per cent of those who prefer to keep time changes in spring and fall said they wanted to balance daylight hours throughout the year, with 36 per cent identifying health and wellness concerns.

VIDEO: Timelapse taken in Newfoundland shows intense snowfall
Jan 20, 2020 4:05 PM
Comments
We welcome your feedback and encourage you to share your thoughts on this story. We ask that you be respectful of others and their points of view, refrain from personal attacks and stay on topic. To learn about our commenting policies and how we moderate, please read our Community Guidelines.