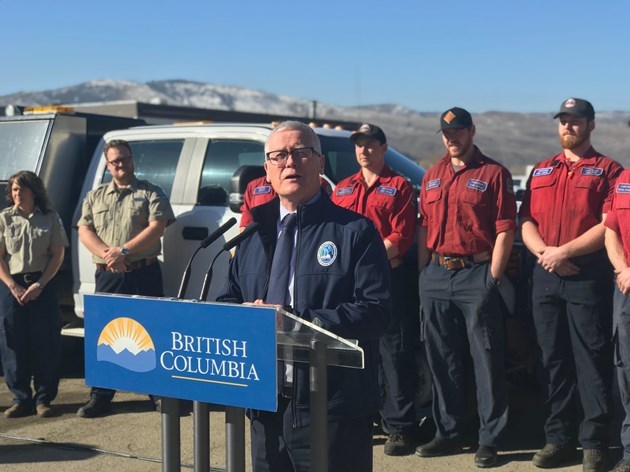 New technologies — including drones, night vision goggles and field laptops — are part of a host of measures the province will use during the 2019 wildfire season.

Doug Donaldson, the Minister of Forests, Lands, Natural Resource Operations and Rural Development, was in Kamloops today (March 19) to discuss the upcoming fire season and the recent increases to the province's firefighting budget.

In February, as part of the provincial budget, the baseline for firefighting efforts was increased from $64 million to $101 million, though last year more than $500 million was spent fighting the flames.

The base budget increase will help in a variety of ways, Donaldson says.

"The uplift in the budget by 58 per cent on direct fire response means more boots on the ground in every region," he says. "It means...initial attack crews getting to fires earlier, it also means increased air support and longer (flying) seasons."

He calls the increase in response capacity "the most substantial move" for the forthcoming season, though there are other projects.

During the media event, he offered a list of projects the province is currently working on:

He also notes there was a recent symposium in Kamloops on wildfire prevention, and that new technology is being brought in to assist, including night vision goggles for firefighters, drones to help map fires and laptops used in the field to help manage information.

Donaldson says the province is also going to work with First Nations to learn more from their traditional knowledge of the land.

The ministry's ramped up efforts were spurred by the 2018 report from former B.C. Liberal cabinet minister George Abbott and Chief Maureen Chapman that looked at fires and flooding in B.C.