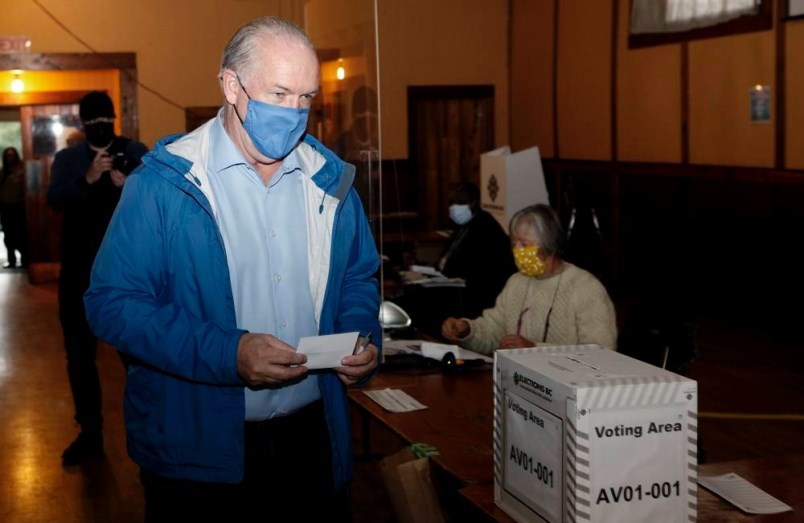 BC NDP Leader John Horgan prepares to cast his ballot at Luxton Hall during advanced polls for the provincial election in Langford on Monday, Oct. 19, 2020. (via The Canadian Press)

British Columbia’s election campaign is kicking off its final five days with a full slate of announcements.

NDP Leader John Horgan made an announcement at a stop on Vancouver Island this morning (Oct. 19) before making his way to Saanich North and then heading to the lower mainland.

Liberal Leader Andrew Wilkinson will start off this morning with an announcement in Pitt Meadows.

And Green Leader Sonia Fursetenau is due to discuss her party’s plans for B.C. Ferries in Brentwood Bay early this afternoon.

Their announcements come after a weekend in which Wilkinson and Furstenau took aim at the incumbent.

Wilkinson accused the NDP of failing to support communities reliant on the forestry industry while visiting Campbell River, where workers were hit hard by a lengthy strike that ended earlier this year.

Furstenau targeted at the NDP and previous Liberal governments’ handling of forests, particularly old growth, as well as the housing affordability crisis.

The weekend also saw high-profile NDP candidate Nathan Cullen field criticism over disparaging remarks he made about a Liberal candidate who is Indigenous, while prominent drug-user advocate Garth Mullins slammed a campaign video by incumbent Liberal Sam Sullivan, who is opposed to the location of a proposed overdose prevention site.