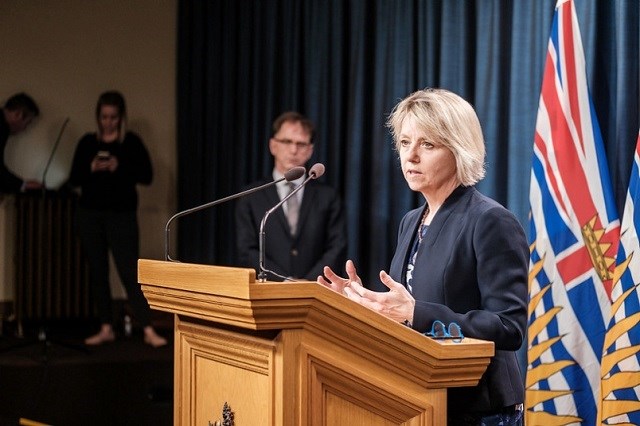 Another resident of the Lynn Valley Care Centre has died from the coronavirus, said Henry, and a 10th long-term care home, the Broadway Pentecostal Lodge in Vancouver, has reported a case of the illness.

However, a 10th long-term care home, the Broadway Pentecostal Lodge in Vancouver, has reported a case of the illness, and cases at the Haro Park Centre, also in Vancouver, have increased, with 27 staff members and 28 residents testing positive.

There are now 64 people in hospital, 26 of whom are in ICU, said Henry, and 183 people have now recovered from their illness.

While nine cases remain in Northern Health's region, there are now 339 cases in the Vancouver Coastal Health region, 218 in Fraser Health, 47 in Island Health and 46 in Interior Health.

Henry said that 55 healthcare workers have been infected from the long-term care facilities.

The B.C. Coroner is investigating the death of a North Vancouver dentist who was at a dental conference linked to a number of COVID-19 cases. It's not known whether his death is related to the coronavirus outbreak.

"The coroner is investigating a sudden, unexpected death in the community," said Henry.

"We don't know if it was related to coronavirus or not, and that is why the coroner is investigating."

While there's less of a jump in the number of reported cases, Henry said that's no sign of the outbreak in B.C. is slowing down.

The cases being reported now are people who were exposed to the virus anywhere from two to 14 days ago.

"I'm certainly not pleased with any trajectory that's above zero," said Henry, "but I think the reality is this reflects what has happened over the last 14 days."

Henry added we won't start seeing the impact from the "draconian" social distancing measures the province has implemented until next week.

"What I want to see is these numbers starting to come down over the next couple of days," said Henry. "We are still in the waiting and watching phase."

That's why it's so important for people to stay home if they have any symptoms, she said, and for people keep their distance from others.

Henry called on faith leaders, and all British Columbians, to stop gathering in groups, including groups of two to three people who don't live together. She asked faith leaders to move to virtual services.

"This is not an order of convenience. This is something that is required to protect people," she said.

New COVID-19 case reported in Northern Health Authority, brings total to five
Mar 23, 2020 10:08 AM
Comments
We welcome your feedback and encourage you to share your thoughts on this story. We ask that you be respectful of others and their points of view, refrain from personal attacks and stay on topic. To learn about our commenting policies and how we moderate, please read our Community Guidelines.