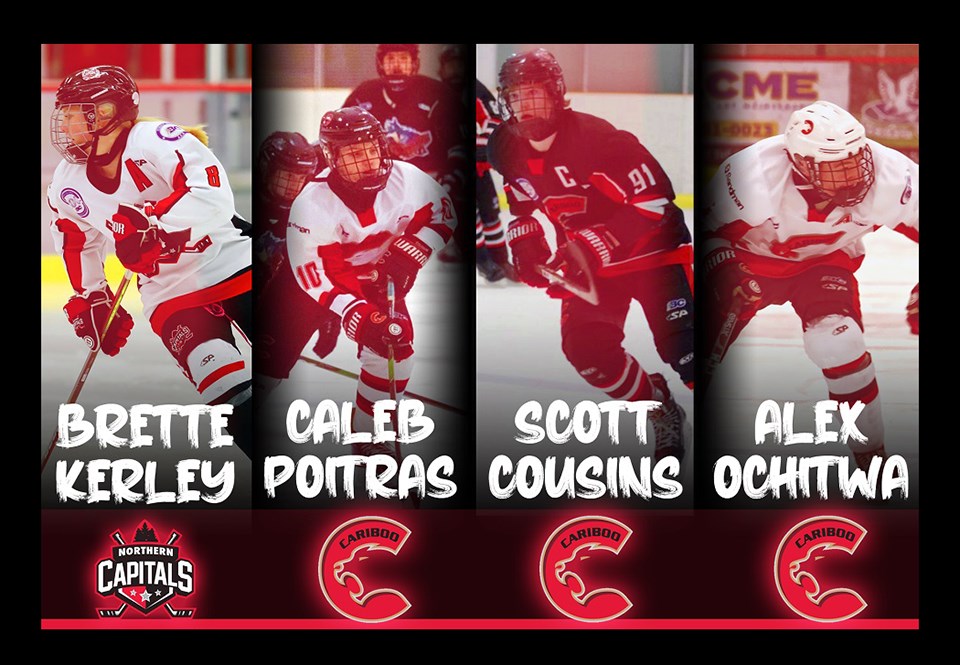 [From left to right] Brette Kerley, Caleb Poitras, Scott Cousins and Alex Ochitwa were named BC Hockey all-stars for the 2019-20 season. (via Cariboo Hockey)

The year was cut short due to COVID-19, but hockey’s provincial governing body recognized the efforts of a Prince George player in each of B.C.’s top four divisions.

BC Hockey released its annual all-star rosters this week, selecting a goaltender, two defence and two forwards in 2019-20 major AAA play in highlighting their skills and dedication to the game.

The Williams Lake product led the offensive charge for Prince George’s female midget AAA team with 26 points in 32 games, one less than her 27-point rookie debut in 2018-19.

She served as an alternate captain to teammate (and best friend) Paige Outhouse.

Ochitwa set a new personal-best with his Cariboo Cougars, who finished fifth in the standings despite going 9-0-1 in their last 10 games.

The Prince George alternate captain tallied 54 points in 30 regular-season games with the Major Midget Cats, including 23 goals and a team-high 31 assists, one point behind fellow all-star Dylan Wightman of the Okanagan Rockets in the league-scoring race.

He’s set to suit up in the BCHL next year after signing with the Merritt Centennials last month.

Captain Cousins put on a scoring-clinic this year, recording 57 points in 28 games, 14 more points than his Under-16 teammate Brady McIsaac.

The Prince George product’s 28 goals and 29 assists were also team-highs for the Minor Midget Cougars, propelling him to third in league stats, but was second overall with 2.04 points per game.

Cousins’ teammates rallied to its first regular-season title and swept the North Island Silvertips in the first-round of playoffs before the year was cancelled.

Poitras had the best points-per-game average in the BC Major Bantam League at 1.77, and he missed four games too.

The Prince George multi-sport athlete notched 46 points in 26 games, scoring a goal in every one of them and adding 20 assists along the way.

The 14-year-old claimed second in league-scoring, while his team finished third with a regular-season record of 14-14-0-2.