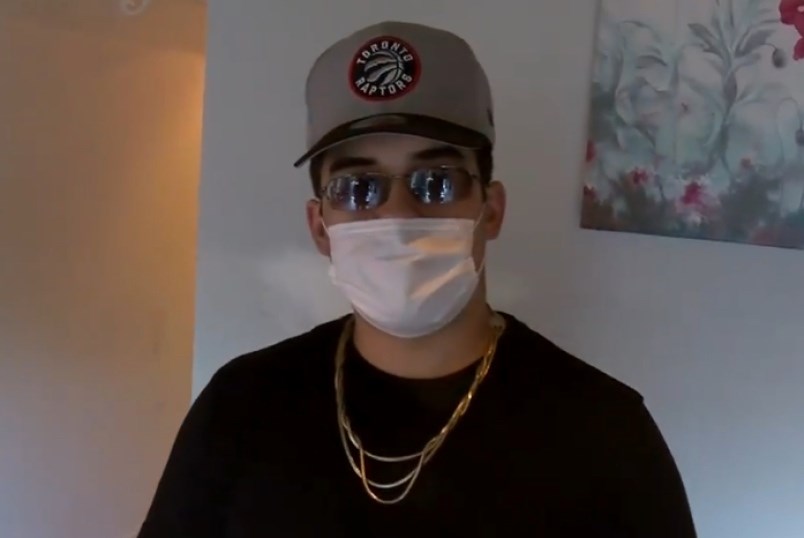 Nate Christian received a $2,300 ticket for hosting a gathering. He says he took steps to keep his guests safe and had nowhere near the maximum amount of 50 people in his small unit. (via CHEK NEWS)

A 20-year-old Victoria manwho had two parties broken up over the weekend says he plans to fight the $2,300 ticket he received for breaching the COVID-19 Related Measures Act.

“I just think it’s a bunch of B.S.,” Nate Christian told CHEK News. “I had a party man, it wasn’t even a party, it was like a hangout. I gave everybody hand sanitizer, I took everyone’s name down, I showed the cops that and they did not care, they said whatever you are getting the ticket.”

Officers were called to the multi-unit residential building in the 1000 block of Fort Street twice on the weekend.

On Friday night, an estimated 40 to 60 youth were packed inside the one-bedroom suite, police said, and the room was so crowded and hot there was condensation on the windows and the party attendees were sweating.

Police returned early Sunday after receiving a noise complaint. This time, a guest was arrested for obstructing a peace officer fined $230 for violating the COVID-19 Related Measures Act.

The 18-year-old male guest refused to co-operate and leave when police broke the party up, said VicPD Const. Cam MacIntyre.

Christian said there were fewer people in attendance the second night and some were wearing masks. He said the only rule he failed to follow was the one about physical distancing.

“It wasn’t that many people, man. It’s not like I had 250 people not wearing masks — 80 per cent of the people in the house were wearing masks,” he said.

“In this small space [we can’t socially distance] … but that’s why we kicked people out because the cops were coming. So no, we weren’t following it, but when the cops came here there were only 15 people here. ”

Christian, who has been evicted, said he plans to fight the ticket.

“I am fighting them in court,” he said.

“Me and everybody who was at this party are going to testify and say we were a metre and a half apart like we spread it out and everything.”\\

Several tickets were also handed out in the Lower Mainland over the weekend.

Surrey RCMP said one restaurant, two event and banquet spaces, and an after-hours club were each given $2,300 tickets over the weekend, after they were caught contravening health officials’ orders about groups.

Police said all four venues had previously been issued warnings, and were among 429 checks conducted over the weekend for COVID-19 compliance.

In Richmond, police found significantly more than 50 people in a private sports centre.

A Richmond RCMP spokesperson said officers initially took “an educational approach” — as they did with several other private gatherings over the weekend — “but it was quite clear that the business needed further incentive to comply” with public health orders.

The operator of the facility was hit with a $2,300 violation ticket under the COVID-19 Related Measures Act.

Premier John Horgan said it was “disappointing” the tickets were necessary, “but we will not stand by and let a small number of people undo the hard work of British Columbians to prevent the spread of COVID-19. Thank you to the vast majority of people doing their part to keep each other safe.”

Police can recommend charges if violation tickets do not prove to be effective deterrents, or in cases of egregious contraventions or for repeat offenders. On conviction, penalties of up to $10,000 may be levied, according to the province.

- with files from Cindy E. Harnett, Times Colonist, and the Vancouver Sun