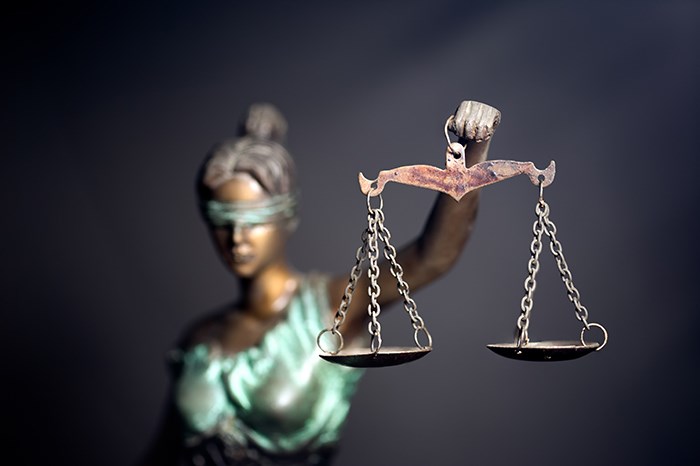 On the late evening of Oct. 23, 2018, Gary Nelms deliberately broke off the lit end of his cigarette and tossed it onto the front porch of his partner’s trailer on Songhees Nation lands.

He and Laurie Fisher had argued that day and she told him not to come home.

She’d even phoned the RCMP, who visited Nelms at his security-guard job in downtown Victoria and told him not to go back to the trailer that night.

But the 50-year-old continued to call Fisher, leaving angry messages, threatening to slash the tires on her car and demanding that she pick him up from work.

Eventually, Nelms found his way back to her home, where he had been staying, about 10:30 p.m.

At 11 p.m., Fisher awoke to a popping noise and found the deck of her trailer engulfed in flames. The front and back doors were blocked by flames and she escaped through a window.

Her home and all her belongings were destroyed. And the damage didn’t stop there. The fire had spread and destroyed the home and possessions of Fisher’s neighbour, Sheila Bridger.

For that “dangerous and callous act,” Judge Lisa Mrozinski handed Nelms an 18-month conditional sentence, followed by 12 months of probation.

Nelms also pleaded guilty to threatening Fisher and to breaching his bail conditions by contacting her on July 22, 2019.

Mrozinski sentenced him to 30 days on both counts.

The case was unusual because there was no proof Nelms committed arson, said the judge.

Bridger had seen Fisher smoking a cigarette on the porch at 10:30 p.m. The fire investigation concluded only that the fire started on Fisher’s deck, that it could have been caused by a discarded cigarette and that no accelerant was used, said the judge.

A conviction for arson was unlikely, prosecutor Paul Cheeseman told the court at Nelms’ sentencing hearing. Instead, Nelms pleaded guilty to mischief causing danger to life and damage to property.

“Whatever the cause of the fire, Mr. Nelms admits that he did tear off the lit end of a cigarette and discard it on Miss Fisher’s porch,” said Mrozinski. “Part of the sentencing must address Mr. Nelms’ carelessness in that moment.”

Both women are devastated by their losses, said Mrozinski.

“The loss of their homes, their security, the tearing apart of their families agonizes them to this day. Miss Bridger lost a beloved pet cat. Her agony in particular is raw,” said the judge.

At the sentencing hearing, Bridger’s daughter read aloud her mother’s victim-impact statement, while Bridger stood and glared at Nelms. He coloured, leaned forward in his chair and stared at the ground.

“As [Bridger’s] two victim-impact statements show clearly, she believed he committed arson and that he deliberately set her home on fire and that he is dangerous,” said Mrozinski.

Both Crown and Nelms’ defence lawyer, Marie Morrison, agreed that the crime required a jail sentence, but Morrison argued that to jail Nelms would be a step backward, given his progress in treatment.

The issue Mrozinski had to decide was whether it was appropriate for Nelms to serve his sentence in the community.

Court heard that Nelms is an alcoholic who has been living in a rehabilitative facility in Surrey since Aug. 1. A pre-sentence report and a psychological report prepared for the court show Nelms is committed to sobriety and falls in the low-risk category for both future spousal violence and violence. The reports show Nelms is able to work, form relationships and live in the community without offending.

The psychologist recommended Nelms stay in treatment as long as necessary, saying Nelms would benefit from a respectful-relationships program.

The judge noted that Nelms apologized at the sentencing hearing, but it was “thin gruel” for Bridger because he did not admit to intentionally destroying her home and did not plead guilty to arson.

“Both Miss Fisher and Miss Bridger’s lives were altered irrevocably that evening of Oct. 23. As a senior, Miss Bridger will be hard-pressed to recover all she’s lost financially and emotionally. She blames Mr. Nelms entirely for her suffering and the suffering of her family.”

Mrozinski found it aggravating that Nelms went to Fisher’s home after being warned by police to stay away. She considered his early guilty plea, genuine remorse, acceptance of responsibility and commitment to rehabilitation to be mitigating factors at sentencing.

Although the Crown asked for a restitution order, Mrozinski said it was far more complicated than could be dealt with by the provincial court because of insurance claims and common ownership of property by Nelms and Fisher.

Nelms is unlikely to make good on any order, she said.

During his sentence and probation, Nelms must have no contact with Fisher, Bridger or any member of Bridger’s family. He is forbidden from consuming alcohol or drugs and must take counselling as required.

This story originally appeared in the Times Colonist.

PHOTOS: Prince George fills house with 400 volunteers for incoming countries at 2020 World Women’s Curling Championships
Jan 21, 2020 3:26 PM
Comments
We welcome your feedback and encourage you to share your thoughts on this story. We ask that you be respectful of others and their points of view, refrain from personal attacks and stay on topic. To learn about our commenting policies and how we moderate, please read our Community Guidelines.