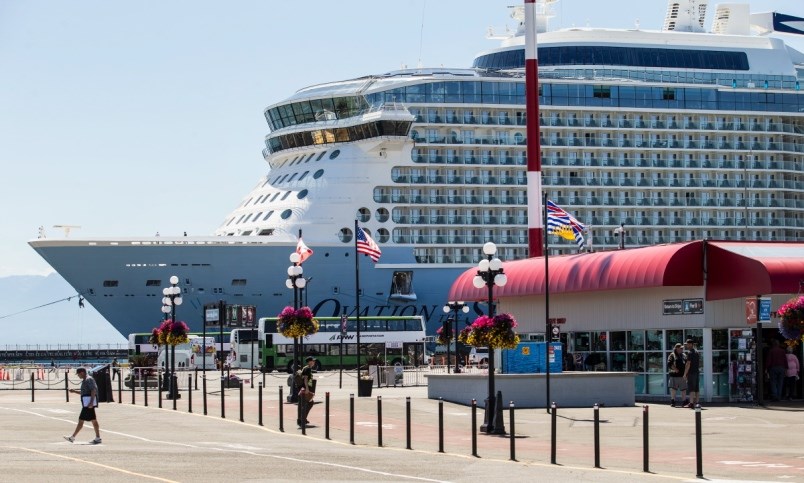 Victoria Mayor Lisa Helps wants to investigate the city’s ability to crack down on cruise ships and require them to plug into on-shore electrical outlets instead of idling in port.

In a motion going to committee of the whole next week, Helps and councillors Ben Isitt and Marianne Alto call for a staff report on the city’s legal authority to regulate cruise ships while they’re in port.

Specifically, they want to know if the city could require cruise ships to install shore power by a particular date in order to eliminate carbon emissions and particulate matter.

The motion recommends that council ask the Greater Victoria Harbour Authority to refrain from increasing the number of ships that visit Victoria each year and stop signing long-term contracts until emissions and waste issues are resolved.

In addition, Helps, Isitt and Alto want the harbour authority to increase pressure on the cruise-ship industry to install shore power at Ogden Point. “We’re in a climate emergency,” said Helps, who authored the motion. The city declared a climate emergency in February. “And so, in climate emergencies, we can’t have business as usual.”

Helps said she expects the cruise industry to pick up the tab for installing shore power rather than requiring taxpayers to foot the bill. “There’s no shortage of profits to invest in innovation and that’s certainly my expectation,” she said.

Helps stressed in an interview that the motion is not an attack on the harbour authority and her report acknowledges the efforts the authority has taken to reduce emissions from buses and shuttle services, and to encourage passengers to walk downtown from the ships.

But Ian Robertson, the harbour authority’s chief executive officer, said he was “surprised and disappointed” by the mayor’s motion. “There’s no question more can be done,” he said. “But I was hoping that we could find a more collaborative approach to deal with this.”

He noted, for example, that the harbour authority plans to release an emissions inventory report next week.

“I would have preferred an opportunity to have first briefed council and mayor on the results of that emissions report and then, together, talk about ways we can again work together to reduce the impact of emissions.”

Robertson acknowledged that switching to shore power would reduce greenhouse-gas emissions, but he said it’s not as simple as flipping a switch. “It’s a challenging, difficult process,” he said. “It can be done. Vancouver, Seattle and Juneau, Alaska, are ports on the West Coast that all have shore power and they’ve done it. But … they’ve collaborated with industry and what I’m not reading in the motion that the mayor has put forward is anything about collaboration and that’s disappointing to me.”

Robertson said it’s unclear at this point whether there’s enough power coming into Victoria to supply the ships. An estimate completed in 2013 pegged the cost of installing shore power at $13 million.

“We calculate that now to be $15 million and that’s a conservative estimate,” Robertson said. “But, again, that doesn’t include any costs of having to bring the power into the James Bay area. There is not enough power there right now, so there needs to be conversations with B.C. Hydro on being able to do just that.”

Even with shore power outlets in place, Robertson said not all ships are capable of using them. “We estimate that about 48 per cent of the ships calling on Victoria have the capability to use shore power,” he said.

Helps acknowledged the potential hurdles. “I know there are all sorts of challenges with B.C. Hydro and this and that,” she said. “But, you know, we’re innovative folks and when there are challenges we can think of solutions.”