The trend remains upward and it's not sitting well with B.C.'s provincial health officer.

Of those new cases, three were recorded in Northern Health, inching its total closer to 100 at 96.

"We need to do better collectively to stop these exposure events from happening," said Dr. Henry during today's news conference.

"The vast majority of the people who tested positive over the past three days were people who were on our contact list. That means that, as they developed their illness, they were isolated and they no longer exposed others, breaking those chains of transmission.

Haida Gwaii is entering its third week under a community-outbreak alert since it was initially declared on July 24, and, as of Aug. 4, the number of cases there have since climbed to 24, only 10 of which were listed as active.

According to the BC Centre for Disease Control (BCCDC), as seen in the graphic below, there have been 14 cases reported in the northwest between July 24 and Aug. 6, all related to Haida Gwaii, while zero have been recorded in the northeast or northern interior, which includes Prince George.

For a 10th straight day, nobody passed away from the virus with zero new deaths the weekend. The toll remains at 195.

The day-by-by case counts are as follows:

There are 445 active cases in the province, including nine in hospital, three in critical care and 3,425 recoveries (89 per cent).

"Our number of new cases is climbing, and it's climbing to levels that we haven't seen in a number of months," said B.C. Health Minister Adrian Dix.

"The number of people now in self-isolation is disturbing. Though some increase was expected, each of us knows our numbers are too high."

He also urged residents to stop going to parties as most of the new cases are related to large gatherings.

With the resumption of the school year looming, Dr. Henry's office is under increasing pressure to require students to wear masks in class.

She said it would be impractical to require students to wear masks in class all day, and reiterated that it is the least effective of the measures that reduce the risk of spreading the virus, saying "masks are the least effective part of our layers of protection."

- with files from Nelson Bennett, Business In Vancouver 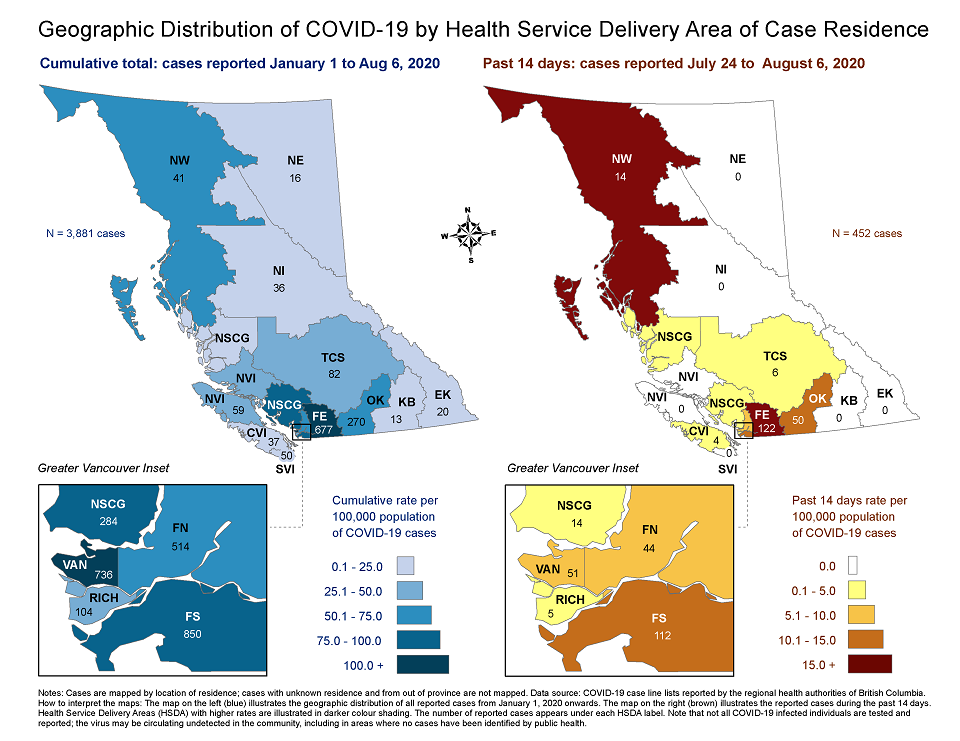