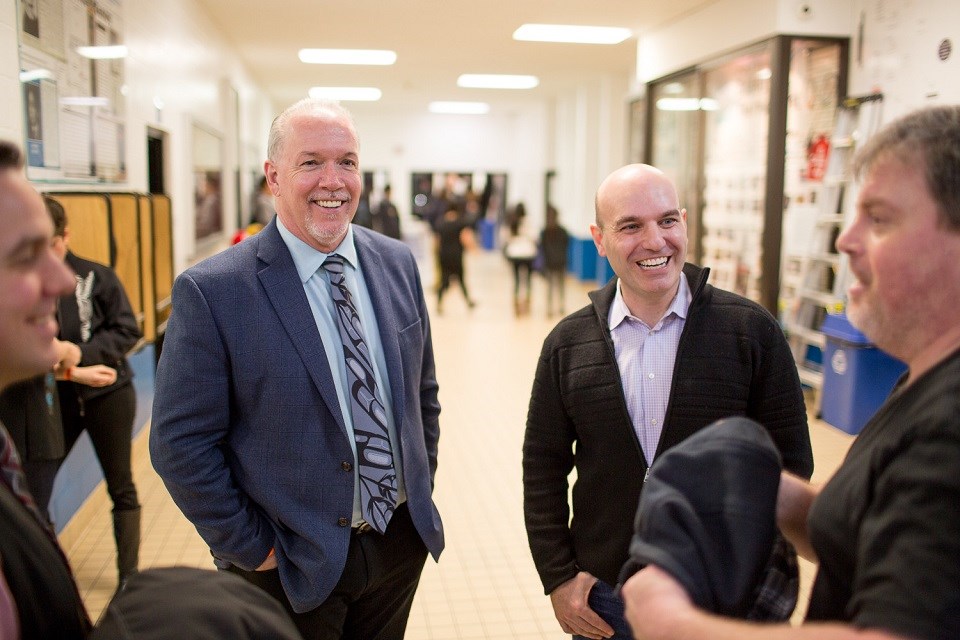 Nathan Cullen (right), former five-time MP for Skeena-Bulkley Valley, has been appointed by Premier John Horgan, seen here in 2017, to be the liaison between all parties in Coastal GasLink pipeline dispute (via Flickr/BC NDP)

A prominent northern B.C. politician is stepping in to help find a peaceful resolution to the Coastal GasLink pipeline dispute.

Premier John Horgan announced today (Jan. 27) he has appointed Nathan Cullen to be a liaison between the province, Wet’suwet’en Hereditary Chiefs, RCMP and other parties involved with regards to the project.

The 47-year-old has been asked to provide fact-finding, facilitation and analysis while in his new position.

“His focus will be on de-escalating the conflict surrounding the court-ordered interlocutory injunction regarding access to the Morice West Forest Service Road,” reads a provincial release.

Coastal GasLink has signed agreements with 20 elected First Nations along the pipeline's 670-kilometre route from northeastern B.C. to an export terminal in Kitimat but the hereditary clan chiefs say it has no authority without their consent.

Supporters of the clan chiefs felled trees along the road and built encampments after the chiefs issued an eviction notice to the company soon after the injunction was granted.

This comes after Horgan was scrutinized by the local First Nation for not meeting with its members while on his tour of B.C.’s north, which he explained to the media was initially scheduled around attending a pair of outdoor hockey games in Nak’azdli/Fort St. James.

“I’m pleased all parties have agreed to the appointment of a liaison,” said Horgan in the same statement.

“Nathan has agreed to act as an intermediary in the hopes of finding a solution to this challenging dispute.”

Cullen lives in Smithers since 1998, the location of the Office of the Wet’suwet’en, and served five consecutive terms (2004-2019) as the Skeena-Bulkley Valley MP for the NDP.

He announced in March last year he would not seek re-election in last year’s federal race.