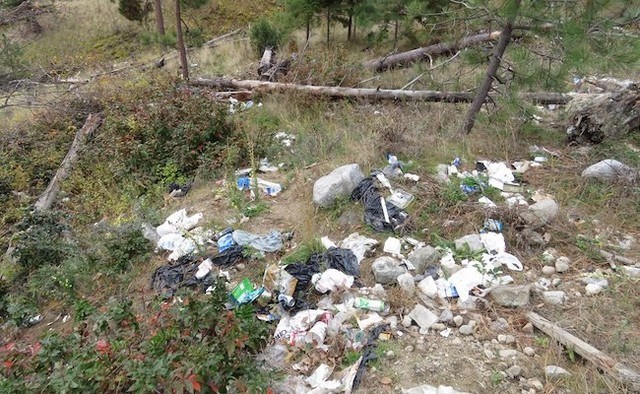 (via BC Conservation Officer Service)

The BC Conservation Officer Service has charged Lake Okanagan Resort after failure to manage attractants led to six bears being destroyed for public safety.

While the service did not name the Kelowna business, neighbours have identified the resort as the culprit, and bear traps have been seen in the area.

The resort is charged in connection with attracting dangerous wildlife and was also issued a Dangerous Wildlife Protection Order.

Fines of $230 can be levied for a first offence, with $570 fines for failing to comply with an order.

"Conservation officers had no choice after the bears had become habituated to garbage, lost their fear of humans, and were a significant public safety concern. Bears had charged at people and were climbing structures to access garbage," the service posted on its Facebook page, along with photos showing garbage strewn about the area.

"This is a long-term bear attractant issue that we were unaware of," Hanratty told Glacier Media when we first broke the story on Wednesday (Oct. 16).

The best way to keep people safe and bears from being destroyed is to secure attractants around your home or business.

Irresponsible trash disposal leads to 6 bear deaths
Oct 16, 2019 11:04 AM
Comments
We welcome your feedback and encourage you to share your thoughts. We ask that you be respectful of others and their points of view, refrain from personal attacks and stay on topic. To learn about our commenting policies and how we moderate, please read our Community Guidelines.