José has been able to grasp difficult math concepts on his own since he was eight
0
Dec 1, 2019 5:05 PM By: Glacier Media 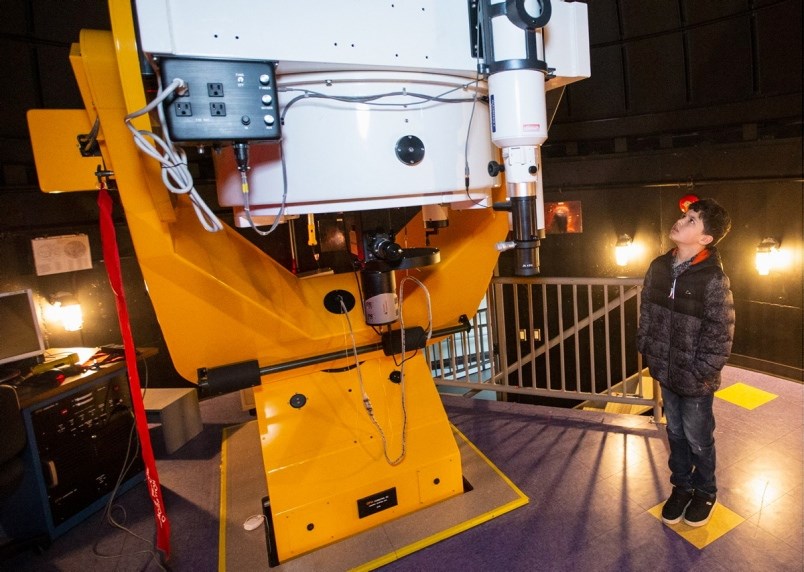 Jose Valdes Rodriguez, who says he wants to be an astronomer and help guide space missions, casts his eyes on the observatory telescope at the University of Victoria's Bob Wright Centre. (via Darrren Stone, Times Colonist)

José Valdes Rodriguez is a whiz in high-school math.

He speaks four languages, and has been a guest speaker at events held at the University of Victoria’s observatory.

José, who is in Grade 5 French immersion at Ecole John Stubbs Memorial School, is already taking biology 11, pre-calculus 12 and other high school courses through the South Island Distance Education School.

His mother, Cynthia Rodriguez, said José has been able to grasp difficult math concepts on his own since he was eight. It’s not something that comes from his parents — both are musicians.

Among his other accomplishments, Rodriguez said José has memorized the value of pi to 200 digits, along with the periodic table.

Things that interest him gain his full attention, his mother explained.

“When he was 3 1/2, he was diagnosed with autism and we found that he has an amazing memory,” she said. “We look at it positively instead of negatively. I think it is a gift he has.

“I think the memory is just something that helps a lot when you want to learn.”

Provision is made for José to work at his own pace at John Stubbs. “When the kids are doing Grade 5 math, he goes to a corner, where they have a computer for him,” Rodriguez said.

An education assistant sits in.

It’s not all academics for José, who is a proud member of the school handball team and plans to sign up for basketball. He also enjoys karate.

José’s astronomy acumen led him to meet Karun Thanjavur, the senior lab instructor in the University of Victoria’s department of physics and astronomy. They met when José began attending astronomy open houses at UVic with his mother.

“He already knew enough to actually talk to people at the university level,” said Thanjavur, who arranged for an instructor to allow José to sit in on an introductory astronomy course — he was too young to sign up but could already handle the content.

“That’s how I could see his level of preparation already at age six,” he said.

“Every opportunity I get, I just want to provide so that he can get ahead.

“He’s way ahead of his peers in learning. It’s just that the system is not set up to help a child like that.”

José said he has a firm idea of what he wants to do for a living. “First of all, I would want to be an astronomer. I would also like to work for NASA and [aerospace company] SpaceX.”

He said he wants to help guide space missions.

José enthusiastically announces that he speaks English, French and Spanish, the latter because his parents are from Cuba.

“And I started learning Russian when I was four out of nowhere,” said José, who takes Russian classes on Saturdays at UVic.