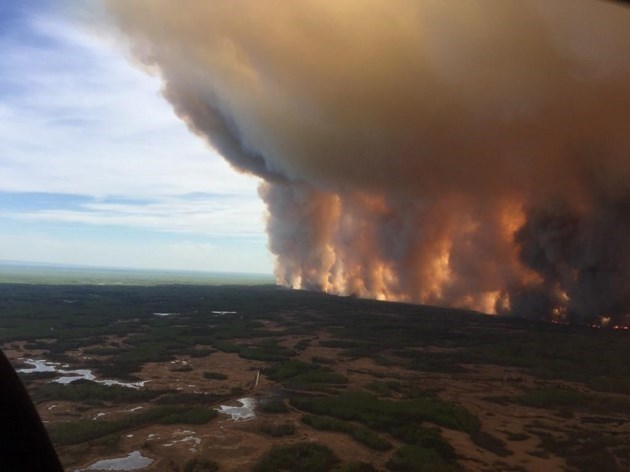 Smoke billows from a wildfire near High Level, Alta. (via The Canadian Press)

The B.C. Wildfire Service will be deploying 267 personnel to Alberta this week, as a result of the "increasing wildfire threat in that province."

In a news release issued today (May 21), the provincial government says crews will be sent out tomorrow (May 22) and Thursday (May 23), "to help where needed throughout in Alberta."

The request for help was made through the Canadian Interagency Forest Fire Centre, which coordinates the mutual sharing of firefighting resources between B.C. and other jurisdictions. All costs are covered by the jurisdiction that requests assistance.

The deployment follows a Level 6-ranked fire currently burning near High Level, Alta. Nearly 5,000 people have cleared out of the northwestern Alberta town and nearby First Nations, with flames licking at the southern edge of the community (High Level is about 750 kilometres northwest of Edmonton).

Over the past two record-setting wildfire seasons in B.C., Alberta has sent firefighting resources to help battle the blazes, notes the B.C. Wildfire Service in the release.

The province says "considering the current and forecasted fire situation in British Columbia, sufficient personnel and resources remain in the province to respond appropriately to any fire activity here."

It notes crews can be deployed out-of-province for up to 19 days but can be recalled at any time.

— with files from The Canadian Press

Power, cell service lost as ‘Level 6’ wildfire burns out of control in High Level
May 21, 2019 9:03 AM
Comments
We welcome your feedback and encourage you to share your thoughts. We ask that you be respectful of others and their points of view, refrain from personal attacks and stay on topic. To learn about our commenting policies and how we moderate, please read our Community Guidelines.