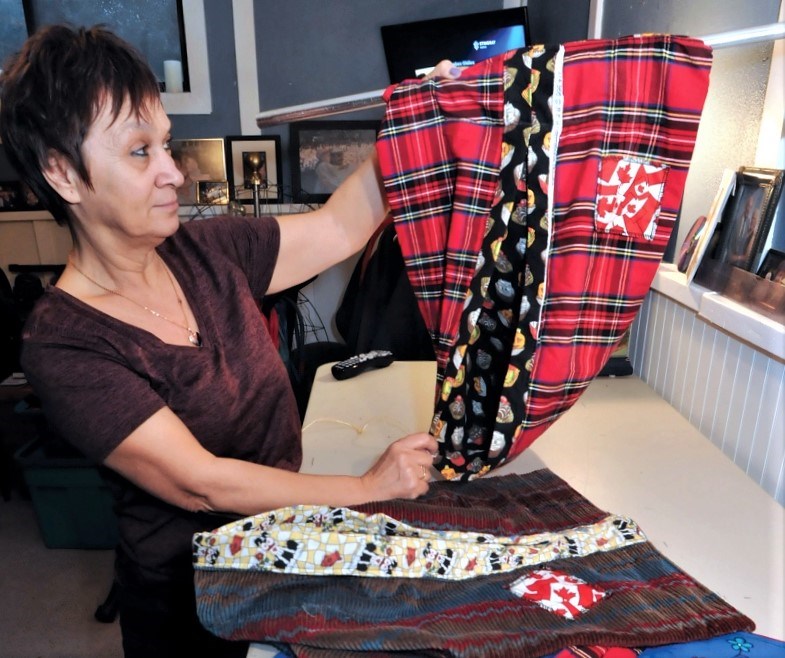 Alev Giannubilo displays the Canadian-flag emblazoned joey pouches she’s been hand-sewing to send to animals affected by the wildfires which have swept through Australia. (via Paul McGrath, North Shore News.)

A North Vancouver woman is doing what she can to comfort injured and orphaned animals thousands of kilometres away.

For the past few weeks, Alev Giannubilo’s basement has been converted into a makeshift sewing studio. For hours a day, she’s been stitching, pinning, sewing and shipping off joey pouches that will be used to comfort kangaroos and other animals affected by the wildfires that have devastated Australia.

“I normally make dog bandanas for a hobby and sell them, so this was right up my alley,” says Giannubilo.

The current wildfire season in Australia has been described as the country’s worst in decades. It’s estimated that at least half a billion animals have perished as a result of the wildfires which have affected every Australian state, with the eastern state of New South Wales being hit the hardest.

Giannubilo was watching the fiery horror unfold on the news one evening last month when the story of a couple using their car to rescue koalas from the encroaching flames inspired her own endeavour.

“I was really emotionally upset by watching it,” she says. “To see something like that is very emotional. I’m a real animal lover, so it just really hit home for me and I just wanted to do something.”

Planter fasciitis – a condition that causes a stabbing foot pain which has caused excruciating pain in Giannubilo’s heel – meant that she couldn’t necessarily help out in a way that required extensive mobility, but luckily she had just the right idea.

“Sewing I can do great because I’m sitting down, but standing up is a real effort for me right now,” she says.

A joey pouch simulates the kangaroo pouches that mother kangaroos use to nurse and house their growing joeys.

Although the fabric pouches Giannubilo has been making don’t contain the complexities of the real thing – there’s no sweat glands that release antimicrobial liquid in hers – they’re supposed to make joey kangaroos, as well as other animals such as koalas orphaned due to the intense wildfires, feel safe, warm and comforted.

“I think people all over the world are making these and sending them,” she says. “It’s wonderful around the world that it’s touching them also and they’re all in there trying to help in any way they can.”

With the help of friends, Giannubilo goal is to hand sew and send 100 joey pouches to the Rescue Collective in Brisbane, Australia. The collective will then distribute the pouches to its network of other rescue centres in need, according to Giannubilo.

Each pouch will have a Canadian flag crest emblazoned on them to let the Aussies know we’re thinking of them here in Canada, she adds.

“I just feel that we can all do a little bit, and I’ve found ever since I’ve put this out there … people are phoning in saying, ‘I can’t afford to donate money, but I have two metres of flannel. Can you use that?’ It just shows that everybody wants to help a little bit,” she says. “We had fires here – that was pretty close to home.”

Each joey pouch that Giannubilo makes is 100 per cent cotton, pre-washed, and uses about two metres of material, including an outer lining an inner lining which is “usually some kind of a fleece, so it’s nice and soft for the joeys.”

Air Canada is currently picking up donations and supplies to send to Australia from six cities across Canada, shipping them there free of charge, according to Giannubilo.

“I can get 35 in an apple box, and I haven’t quite weighed it, but I’m sure if I was to ship that that would be quite expensive,” she says.

A shipment was recently sent out, with a final one occurring this week. After that, Giannubilo will be responsible for making sure her joey pouches make it to Australia.

She’s started a GoFundMe page to help cover the costs, with 100 per cent of donations going to purchase expensive fabric and postage. Left over money will be donated to an Australian wildfire relief centre, she says.

For those who’d rather give material than money, Giannubilo is also graciously accepting cotton fabric donations, which can be donated by messaging her on her GoFundMe page.