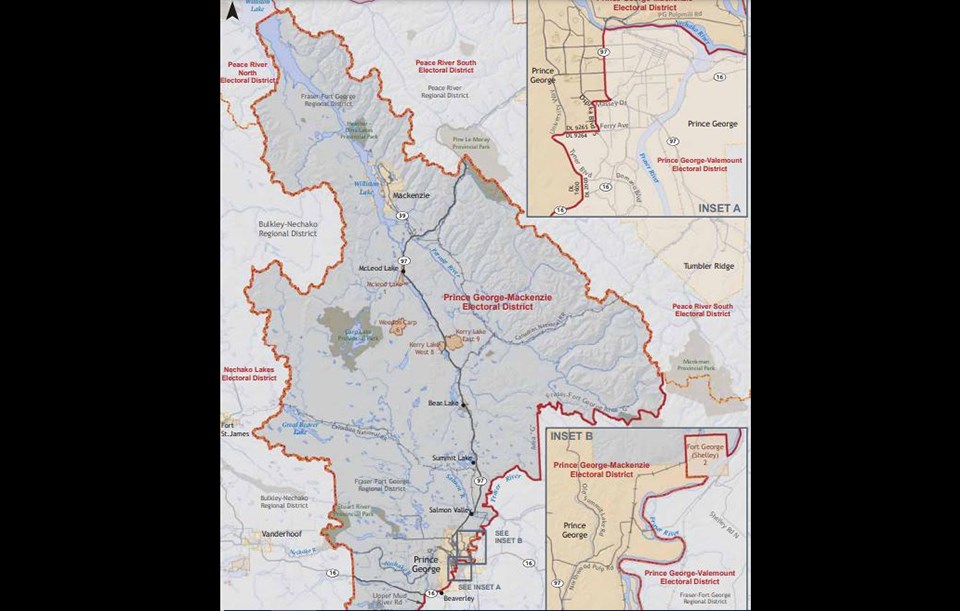 Map of the Prince George-Mackenzie electoral district ahead of the 2020 B.C. election. (via Elections BC)

This is only the fourth time in its history that name will host candidates for a B.C. provincial election after several boundary changes in years past.

Today, the near 20,500 sq-km riding covers the northwest section of the Regional District of Fraser-Fort George.

With respect to our city, it’s divided from its neighbour Prince George-Valemount primarily by Highway 97 and the Nechako River.

Then, the line moves west on Massey Drive to south on Ospika Boulevard until Ferry Avenue travels south on Tyner Boulevard.

If you live to the west of the line as far as Great Beaver Lake, which includes the UNBC, Beaverly and Upper Mud River Road areas, you will be voting in this particular riding.

Heading north, the entire Hart region is also in Prince George-Mackenzie, along with everything west of the Fraser River near the Canfor Pulp Mill and the north side of the Shelley reserve.

Since 2001, the BC Liberals have ruled Prince George-Mackenzie: three terms from Pat Bell (2001-2013) and two from current incumbent Mike Morris (2013-present).

Twenty years ago, it was referred to as Prince George North, when the city was actually split into three ridings.

The region’s primary concerns surround, but not limited to, forestry and lumber production, along with environmental preservation and infrastructure development.

The candidates for the 2020 election are as follows (in alphabetical order):

Raymond Rodgers chosen as 2020 candidate for BC Libertarian Party in Prince George-Mackenzie
Sep 25, 2020 10:15 AM