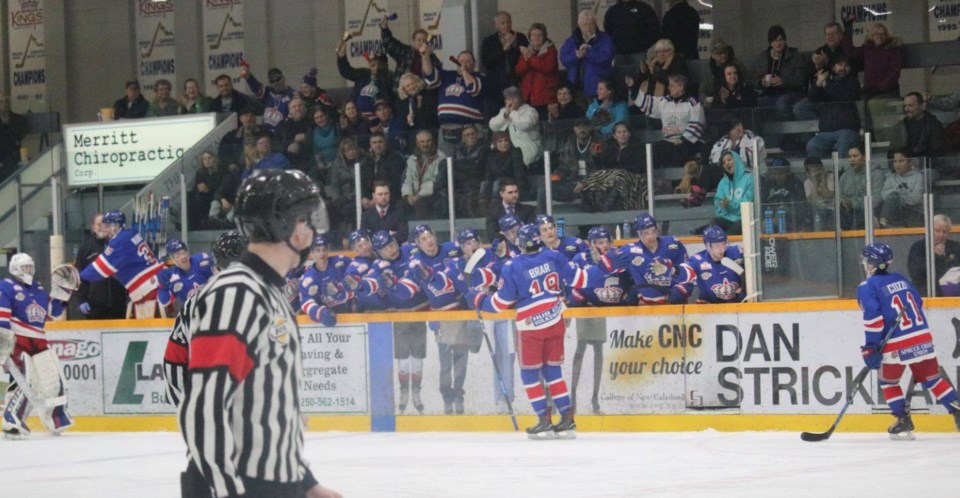 Ben Brar (#18) leads a celebration line after scoring a goal for the Prince George Spruce Kings against the West Kelowna Warriors at the RMCA. (via Chuck Chin Photography) 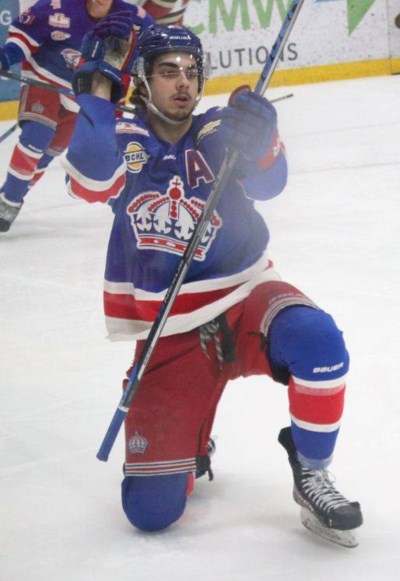 and set a career-high too.”

The 20-year-old led the way in the Prince George Spruce Kings’ 5-2 win over the West Kelowna Warriors at the Rolling Mix Concrete Arena (RMCA), scoring his first BCHL hat-trick in the process.

Thursday night’s (Feb. 14) first goal, potted by Brar, helped him eclipse 30 goals for the first time in his Junior ‘A’ career, coming less than six minutes into the first frame.

His second of the contest regained the one-goal lead for Prince George after West Kelowna tied it up early in the second.

Spruce Kings’ captain Ben Poisson was able to extend the advantage to 3-1 after 40 minutes of play with his 19th of the season with 38 seconds left.

The lad was cut in half to two (4-2) by West Kelowna’s Chase Dubois, a Williams Lake native and former Cariboo Cougar, but it wouldn’t matter as Brar was able to light the lamp for the 32nd time this year on a empty net with 100 seconds left.

Forward Patrick Cozzi was also broke Warriors’ hearts, displaying a four-point performance by assisting on all but one of Prince George’s goals.

Logan Neaton continues to set the new bar high for future Spruce King goaltenders with his 30th victory of the season, stopping 26 of 28 shots.

With the team’s 21st win at the RMCA this year, they’re now two wins away from recording its best season on home ice in recent recorded history.

Before they go for that feat, Prince George will hit the road one last time for the Family Day weekend, playing in Chilliwack on Sunday (Feb. 17) and in Surrey on Monday (Feb. 18).

Puck-drop for both contests is 2 p.m.

The Spruce Kings are also two points behind the Chilliwack Chiefs for first in the Mainland Division with a record of 36-12-1-5.

Two Prince George Cougars, one Spruce King catch eye of NHL scouts in midterm rankings
Jan 21, 2019 5:35 PM
Comments
We welcome your feedback and encourage you to share your thoughts on this story. We ask that you be respectful of others and their points of view, refrain from personal attacks and stay on topic. To learn about our commenting policies and how we moderate, please read our Community Guidelines.