Bullying and gender-neutral bathrooms were among the issues discussed
Oct 17, 2018 1:21 PM By: Hanna Petersen 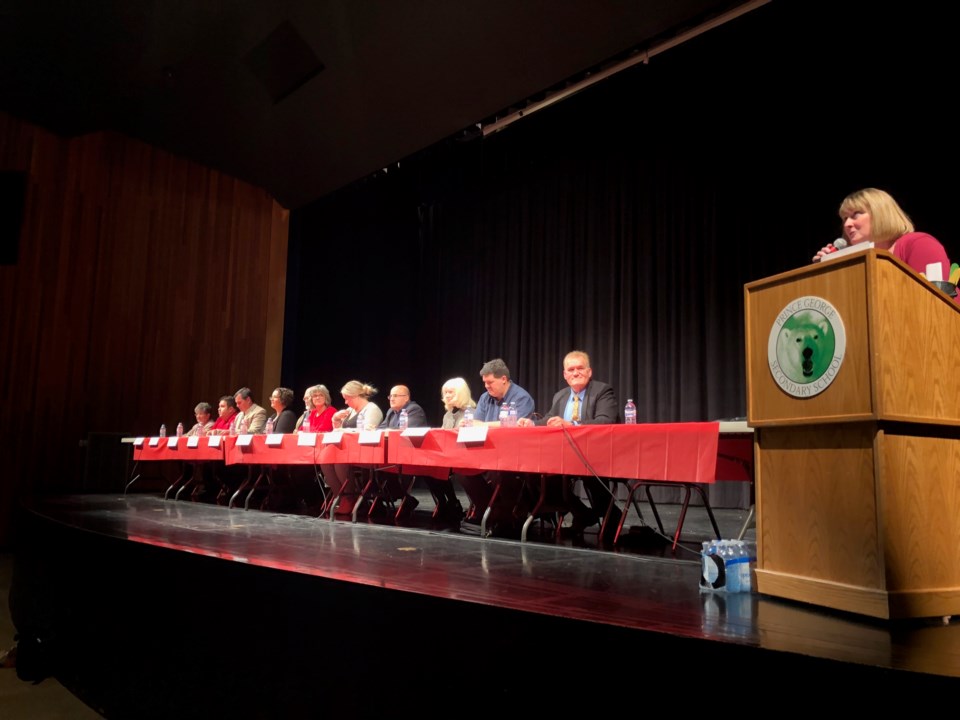 Just over 30 people gathered to watch the Oct. 16 forum, which was held at the same time and date as the UNBC all-candidates forum.

The trustee candidates, however, spent the evening addressing topics as varied as implementing the recommendations from the Truth and Reconciliation Commission, bullying, spending the district’s surplus and implementing gender-neutral bathrooms.

Trustee hopefuls were given two minutes to introduce themselves and their platforms, and then two candidates were selected randomly to answer each question.

Here’s a look at the setup and turnout: pic.twitter.com/yExjhM7ARP

One of the first questions asked by moderator Bob Harris was, "What concrete actions would you take as a trustee to implement the recommendations from the Truth and Reconciliation Commission?"

Sarah Holland was the first to answer: “One of the big things is going to be in funding and making sure our Aboriginal education department has the money that it requires,” she said, adding they also need to provide support for the teachers in the classrooms who are providing an Aboriginal focus.

Stephanie Mikalishen-Deol, who was next to answer, noted she wasn’t 100 per cent familiar with all of the calls to action from the commission.

“I can say where it's truth and reconciliation, SOGI, or special needs, I am 100 per cent in favour of inclusive education, so from a board perspective I think it’s about getting behind it any way possible,” said Mikalishen-Deol.

The next tough question posed to the candidates was, "How would you improve policies and procedures around bullying and harassment?" 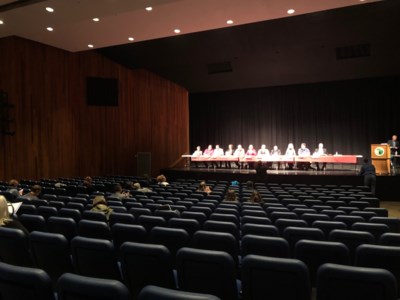 Just over 30 people attended the Oct. 16 All Candidates Forum for School Trustees. (via Hanna Petersen).
“We all know we had two cases of suicides in our district here recently,” answered Ron Polillo. "The key is education, but it’s not just a board issue, it’s a society issue; we have to work together with many different partners to really tackle that.”

He also said the school district needs to do a better job of enforcing their bullying and harassment policies.

“I think the biggest thing is getting people comfortable enough to speak up when they are bullied. We still haven’t made that a comfortable issue for people to come forward and I think that needs to be a focus,” said Betty Bekkering, adding the last time she was on the board from 2011 to 2014, she thought the policies were well written.

“But they are obviously not working, and the new board needs to make it a priority to create better and stronger policies and have students feel comfortable to speak up.”

At the end of September, School District 57 announced it had an operating surplus of $17 million. Two candidates were asked what they would do with that surplus.

“Something I would really like to see is mental health supports in particular; that is something I am really passionate about, and I think training is a great way to do that,” said Mikalishen-Deol, also selected to answer.

Two candidates were asked to provide their position on gender-neutral bathrooms in elementary and secondary schools.

“I don’t have an issue with them,” said Polillo. “I think it’s all a part of the safe and inclusive atmosphere we are trying to foster in the district and, I have to be honest with you, I don’t see it as an issue at all.”

Allan Kranz had a similar response, saying that all schools should be able to provide a traditional male and female washroom as well as a washroom for students who do not wish to use either.

“I think as time, planning and budget allow, every school should have them or more,” said Kranz.

The forum was hosted by the Prince George District Teachers' Association, CUPE 3742, and the Duchess Park Parent Advisory Committee.

On Oct. 20 the electors will be asked to select seven trustees, five in the Prince George Trustee Electoral Area, and one each for Mackenzie and the Robson Valley.

To learn more about the trustee candidates running in the Oct. 20 civic election, check out PrinceGeorgeMatters’ candidate profiles for more information.