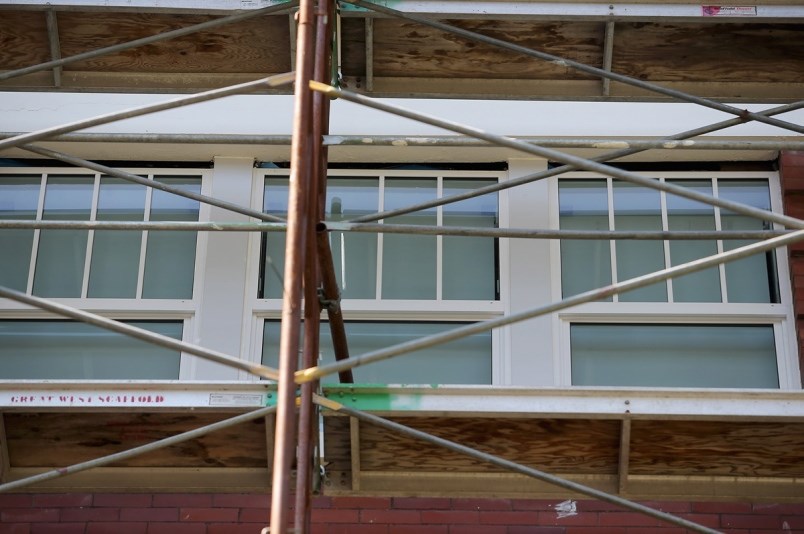 The exterior of Mount Edwards Court, with renovations under way, at 1002 Vancouver St. (via Adrian Lam, Times Colonist)

B.C. Housing blames “miscommunication” for a blunder that led work crews to mistakenly rip out the original wood windows from the third floor of historic Mount Edwards Apartment House in Victoria.

Victoria city officials say the work was done without a permit and contrary to B.C. Housing’s commitment to protect the heritage-designated building, which was built in 1911 as one of the city’s first apartment blocks.

The province bought the property at 1002 Vancouver St. for $3.65 million in 2016 to house former residents of a tent city that sprang up behind the Victoria courthouse.

One of the conditions of the application was that the third-storey windows would be maintained during renovations.

Work crews, however, recently removed the windows without a heritage alteration permit and replaced them with cheaper vinyl knock-offs.

City staff didn’t pull any punches in a report to city council, noting that the vinyl windows “undermine the integrity of the historic building and give it a more superficial appearance.”

Council, however, was caught in a bind. The damage was already done by the time the city found out about it, and councillors were reluctant to ask B.C. Housing — a key partner in providing affordable housing — to displace vulnerable tenants and spend even more money to replace the vinyl windows with wood replicas.

Instead, they approved the work retroactively and directed Mayor Lisa Helps to send a letter to B.C. Housing expressing the city’s displeasure.

“This is a terrible situation to be put in and I feel quite resentful that we are in this situation,” Helps told a committee of the whole meeting.

“But [given] the cost of replacement at this point, the disruption to the tenants, this is the worst-case decision that we have to make.”

“All of us know that if this were not B.C. Housing and [they] were not providing housing for vulnerable people, we would not let this go forward.”

Coun. Ben Isitt proposed having B.C. Housing make a donation to a city heritage fund as a form of deterrent to prevent future mistakes.

”Instead of letting them get off scot-free, maybe meet them in the middle,” he said. “The most costly option for them would be to have to put entirely new wood windows in.”

Council agreed that Helps should ask for a voluntary contribution to a heritage fund and suggested the amount should equal whatever B.C. Housing saved by installing cheaper windows.

B.C. Housing, meanwhile, has issued a statement acknowledging that the rezoning requirement “would have included a plan for renovating the windows in a historically accurate way.”

“Due to a miscommunication between rezoning staff and construction staff, this item was missed,” the statement said. “By the time this was discovered, the majority of the windows had been replaced.”

B.C. Housing stated that it did restore other heritage elements of the building, including the original facade and upper cornices.

“The replacement windows, which mirrored the historical aesthetic of the original windows, were installed with cost- and energy-efficient materials,” the agency said.

B.C. Housing added that it has yet to receive Help’s letter, but will consider the request for a donation if it’s received.

Helps said she hopes the agency will take her letter to heart.

“It’s a rather unfortunate circumstance,” she said. “I don’t think that there was any malintent on anyone’s part. It does sound like a genuine miscommunication between one arm of B.C. Housing and the other.”

United Way, B.C. Cancer Centre of the North providing menstrual products in Prince George to those in need
Jan 17, 2020 4:35 PM

B.C. 'considering' provincewide ban on plastic bags at retail checkouts
Jan 17, 2020 3:45 PM
Comments
We welcome your feedback and encourage you to share your thoughts on this story. We ask that you be respectful of others and their points of view, refrain from personal attacks and stay on topic. To learn about our commenting policies and how we moderate, please read our Community Guidelines.