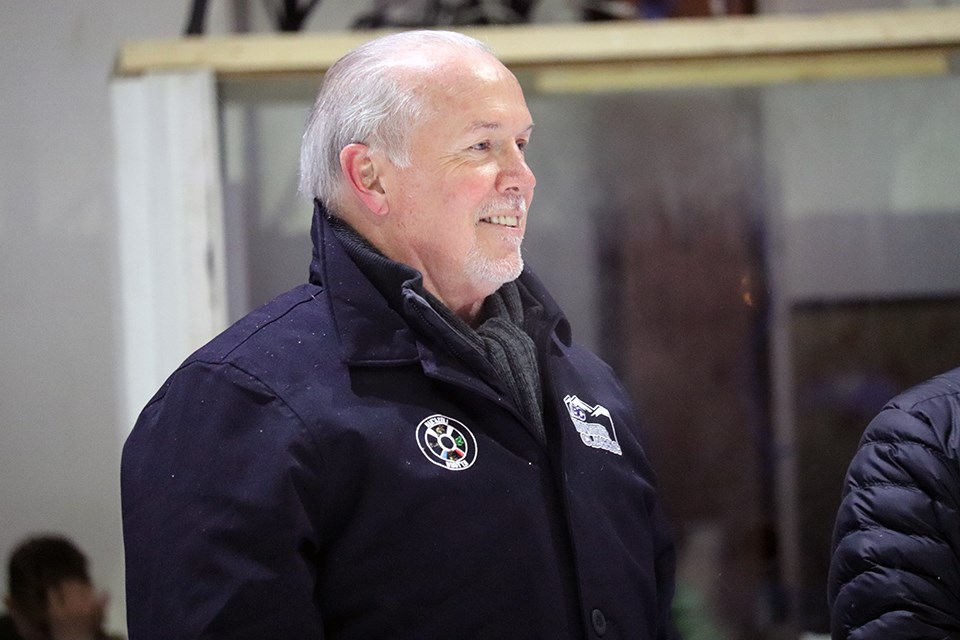 B.C. Premier John Horgan was part of the ceremonial puck drop ahead of the 2020 BC Winter Classic in Fort St. James. (via Kyle Balzer)

It appears a game of back-and-forth is being played between the B.C. government and Wet’suwet’en First Nation.

“I reached out to (Hereditary Chief) Na’moks to talk to him on the phone and he rebuffed my efforts,” Premier John Horgan told PrinceGeorgeMatters on Jan. 18. He was responding to the highest-ranking chief’s comments to The Canadian Press on not agreeing to meet in Smithers while on his northern tour.

This is the latest riff in a pipeline dispute between the provincial government, Coastal GasLink (CGL), the local First Nation and the RCMP, who were given an injunction to set up a controlled access checkpoint for safety purposes northwest of Houston where the project is set to be built.

Horgan said he wants to see a peaceful resolution from all parties to avoid further escalation, but is also mindful a green light is already given on a pipeline that will resource the $40-billion Canada LNG plant under construction in Kitimat.

“Every ‘i’ has been dotted and ‘t’ has been crossed and it has every right to proceed, the courts have confirmed that,” the premier said.

“We have been reaching out to the Wet’suwet’en people for over a year now; I met for a full day in a smokehouse feast at the request of their hereditary leadership, I met again for a half-day with the office of the Wet’suwet’en to try and hammer out an agreement going forward and we’re going to continue to work on that, but I think the challenge for the Wet’suwet’en is that we’re moving on, British Columbia is moving on.”

Horgan pointed to a number of recent events that he claims show B.C.’s "brighter future," including legislature’s unanimous decision to implement the United Nations Declaration on the Rights of Indigenous Peoples (UNDRIP) this past November.

“British Columbians want to turn a page here and have a brighter future than what we’ve had with our past and I know that's what the Wet’suwet’en want as well,” said Horgan.

“I think if we continue to have good-faith discussions, we’ll get through this and we’ll continue to see prosperity, which is what people want in every corner of B.C.”

Horgan's week-long, northern B.C. tour included a visit to the Kitimat LNG-project camp site and to Fort St. James, where a new $116-million hospital was announced.

"It really bothered me that he was not that far away and yet somehow could not take the time to come and speak with us," Na'moks said Saturday (Jan. 18) to The Canadian Press. Na'moks, along with the First Nation's four other chiefs, assert jurisdiction over 22,000 square kilometres of unceded Wet'suwet'en territory.

"We want to show the respect back, too," he said. "If you're going to have decent communication with anybody, it's best to be looking eye to eye."

Horgan notes this tour was scheduled around his initial invitation last summer to attend the 2020 BC Winter Classic in the Highway 27 district, where a pair of major midget hockey games were played outdoors.

“There are a whole bunch of people that want to sit down and talk about their future in their communities and that was the plan,” explained Horgan.

“(Chief Na’moks) said he didn’t want to talk to me on the phone, he wanted me to show up. Well, I showed up the other two times they’ve asked me to, and I’ll get there when I get there. I don’t want to be dismissive about it, but there are people in B.C. that deserve attention and that’s how we’re going to proceed. We have been working with the Wet’suwet’en for a year-and-a-half, weekly, and so to suggest there’s no lines of communication just isn’t true.”

When asked by PrinceGeorgeMatters if Horgan remains confident in the north’s contribution to the province in spite of industry downturn, he was quick to say he’s completely confident, noting local residents’ loyalty to the region that’s "boom and bust."

“Big, big problems in forestry, but those have been coming for a decade-and-a-half, you know, the coming of the pine beetle made it abundantly clear we had challenges with our fiber-basket and then to have two successive fire seasons that eliminated some two million hectares of merchantable timber, these are big challenges. But, resilient communities and some strategic thinking by companies, by communities, by labour and Indigenous communities as well I think will win the day in the end. People aren’t leaving the north, they love being here. It’s not just about employment. It’s about the quality of life and it is that pioneer attitude that you see so prevalent here in Fort St. James exists right across the north.”

The premier is scheduled to meet with regional mayors in Prince George this week to talk about issues, challenges and opportunities moving forward.

He will return to the northern capital for the BC Natural Resources Forum (Jan. 28 to 30) as the keynote speaker.

“The economy is challenged when it comes to forestry, but there are other opportunities that see us growing faster than any other part of the country,” he said.

“LNG Canada and the CGL pipeline is a significant part of that, but there are other issues as well. Working to make sure that we’re protecting habitat for caribou in the Peace Country is something we’re working hard on, some challenges there as well, but I think people of goodwill, if you want to sit down, roll up your sleeves, put aside your own point-of-view to try and find a common way forward for community, I think that’s what everybody wants to see that’s what I’ll work towards.”