Cameras reveal how animals change behaviour when people move in 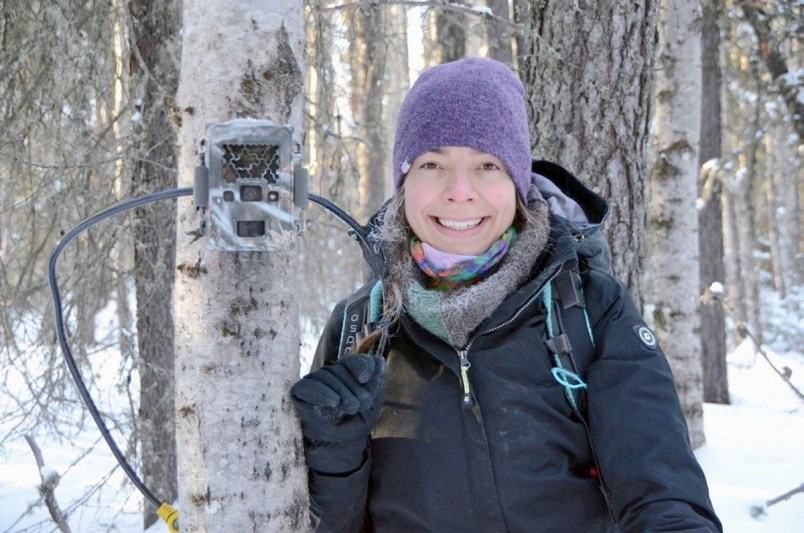 Sandra Frey, a UVic Masters student, uses a camera trap to capture pictures of animals when they trigger a motion sensor. (via Sandra Frey)

A UVic graduate student has been setting traps to harvest pictures of animals instead of their skins, to demonstrate how animals shift their behaviour when humans disturb their habitat.

Sandra Frey completed her work for a master’s degree at the University of Victoria in 2018, using image data collected by cameras in the Rocky Mountains of Alberta.

“These are remote cameras that we put up in the field for months, even years, to capture and download images,” said Frey. The cameras are motion-activated. “And all these images are time-stamped, so we know the time and date these animals are active.”

Frey said cameras have in the past mostly been used by wildlife scientists to infer large-scale trends, such as species presence or population rise or decline.

But she hoped to gather a more subtle picture of what was happening with wildlife by looking at their behaviour as they encounter human disturbances in or near their habitat.

Frey’s work was recognized at a ceremony this week in Ottawa, where she was granted the Mitacs Award for Outstanding Innovation by a master’s student. Mitacs is a not-for-profit organization funded by the federal and provincial governments to foster growth and new thinking in Canada by solving business challenges with research.

Some findings came as no surprise. For example, wolves in the Kananaskis, where the habitat is more disturbed by human activity, are more nocturnal than their wilderness-dwelling brethren. Kananaskis wolves hunt late at night and early in the morning, the darkest hours of the day. “We expected most animals would become more nocturnal and shift their activity into the night time, when they would be less likely to be disturbed by humans.”

But she said it was a surprise to discover that smaller predators such as martens, a species of weasel, switch from hunting mostly at night to spending more time hunting during the day when faced with human disturbance.

Coyotes, too, appeared to change their habits. In the undisturbed Willmore area, they were typically most active at sunrise and sunset. But when humans arrived, bringing development to an area, coyotes appeared to become active at all hours, day and night.

Frey said it’s not completely understood why coyotes and martens would respond in such a way, but it might be because of changes in wolf habits stemming from human disturbance. With the larger predators staking a new claim to the dark hours, smaller predators might change their own habits in response to their presence.

Shifts in the behaviour of other animals could also be influencing small predators to shift to more daylight activity. For example, certain prey animals that are active in daytime might become more numerous in disturbed areas, and opportunistic hunters such as coyotes might shift their habits to take advantage of that.

“What we may be seeing is a more complex nuance, with animals responding indirectly to human-mediated disturbance,” Frey said. “Sometimes these disturbances that we put on these landscapes in the form of land use or development or just people being there can trigger complex responses that cascade through the food web.”

B.C. providing temporary housing in Prince George, easier access to healthcare facilities for Indigenous peoples
Jan 21, 2020 10:05 AM
Comments
We welcome your feedback and encourage you to share your thoughts on this story. We ask that you be respectful of others and their points of view, refrain from personal attacks and stay on topic. To learn about our commenting policies and how we moderate, please read our Community Guidelines.