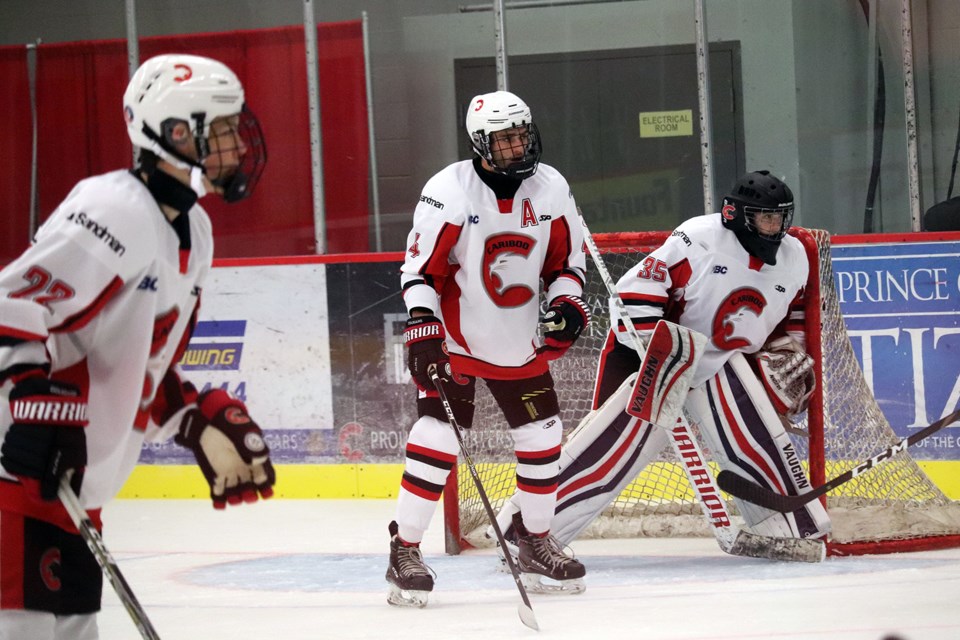 Cariboo Cougars in action against the Thompson Blazers in B.C. Major Midget Hockey (via Kyle Balzer)

Coming into the northern capital having not lost a game in regulation time and a record of 12-0-0-1, the Okanagan Rockets were stymied in a 5-1 rout at Kin 1 Arena and allowing the Cariboo Cougars to split the weekend series on home ice.

On Saturday (Nov. 2), the Major Midget Cats fell 4-1 to the Rockets and their record now stands at 9-2-0-1 through 12 games for fourth place in the BCMML.

“We came through – we battled through all adversity there,” said Cariboo Head Coach Tyler Brough in a team release.

“It was a good character win for the boys. Coming off a loss where we thought we deserved a little bit more, it was nice to see our group rebound.”

Goaltender Jordan Fairlie got the win on Sunday, posting an incredible performance in saving 40 of 41 shots from Okanagan.

Forward Brennan Bott recorded three points in the victory, including two goals, the game-winner in the second period and the fifth marker on an empty net with 4:20 left in regulation.

Teammate Alex Ochitwa got two goals in the contest, potting the opener with 1:18 left in the first period and the fourth goal later in the third while on a power-play.

The 17-year-old ultimately finished with three points himself from the first weekend of November, adding a helper to Captain John Herrington’s fourth of the season on Saturday.

Ochitwa now leads the Cariboo Cougars in the 2019-20 campaign with 18 points (nine goals, nine assists) and admits he had some troubles leading up to his performance against the Rockets.

“They [coaching staff] asked me to be better and, I don’t know, I think everybody played better today [Nov. 3], so it was easier to get things going.”

Combined, the Cougars scored four power-play goals, but only gave up one while short-handed.

Meet the players under Cariboo Cougars’ development umbrella for 2019-20 season
Sep 26, 2019 7:30 AM
Comments
We welcome your feedback and encourage you to share your thoughts. We ask that you be respectful of others and their points of view, refrain from personal attacks and stay on topic. To learn about our commenting policies and how we moderate, please read our Community Guidelines.