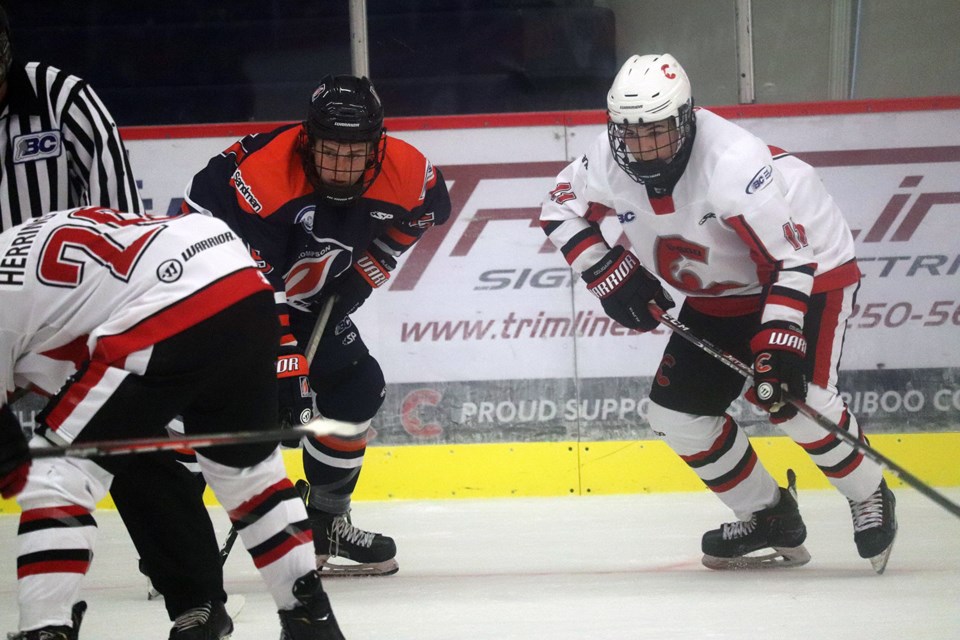 Cariboo Cougars in action against the Thompson Blazers in B.C. Major Midget Hockey (via Kyle Balzer)

It’s not exactly a ‘group of death’ situation, but the Cariboo Cougars may be shown their true colours depending on how they perform at one of the most anticipated events on the calendar.

The Prince George club will head to Calgary on Christmas Day (Dec. 25) for the annual Mac’s AAA World Invitational Hockey Tournament and have been pooled to play against the best teams from the Alberta and Saskatchewan leagues.

In their final round-robin game on Dec. 29, the Major Midget Cats will face-off against the defending tournament-champion St. Albert Nektar Raiders, who, as of this publication, hold first place in the Alberta Midget Hockey League (AMHL) with a record of 16-1-2.

In comparison, with two games left before the Mac’s Tournament, Cariboo sits third in the BC Major Midget League at 15-5-1-1 and three games behind first place.

To make things more interesting, the Prince George Cougars sent Koehn Ziemmer back to the Raiders today (Dec. 13) after a one-game stint with the club in Portland.

The 15-year-old forward, picked fourth overall by Prince George in the 2019 WHL Bantam Draft, is tied with two other players in St. Albert’s scoring race with 16 points in 15 games, including a team-high 10 goals.

ROSTER MOVE | The Cougars have returned forward Koehn Ziemmer (04) to the @RaidersAAA in the AMHL. The roster now sits at 23.#NorthernUprising #WHL pic.twitter.com/947iFpqXba

Two days before taking the ice with the Raiders, Cariboo will match-up with Moose Jaw, the number-one seed out of the Saskatchewan Midget League (SMAAAHL).

The AAA Warriors have three more games before trekking to Calgary, but sit first with a 20-6-1-0 record and 41 points with rookie Caelan Fitzpatrick leading the charge on the scoresheet with 33 points in 27 games.

The Cariboo Cougars’ full schedule for the week-long Mac’s Tournament is as follows (in Pacific Time):

This is the 14th time the Cougars are making an appearance at the international competition.

Cariboo travels to Saanich next weekend, Dec. 21 and 22, for a pair of games against the South Island Royals.

Meet the players under Cariboo Cougars’ development umbrella for 2019-20 season
Sep 26, 2019 7:30 AM
Comments
We welcome your feedback and encourage you to share your thoughts. We ask that you be respectful of others and their points of view, refrain from personal attacks and stay on topic. To learn about our commenting policies and how we moderate, please read our Community Guidelines.