CHL’s 2019 Sportsman of the Year is an ex-Prince George, Cariboo Cougar 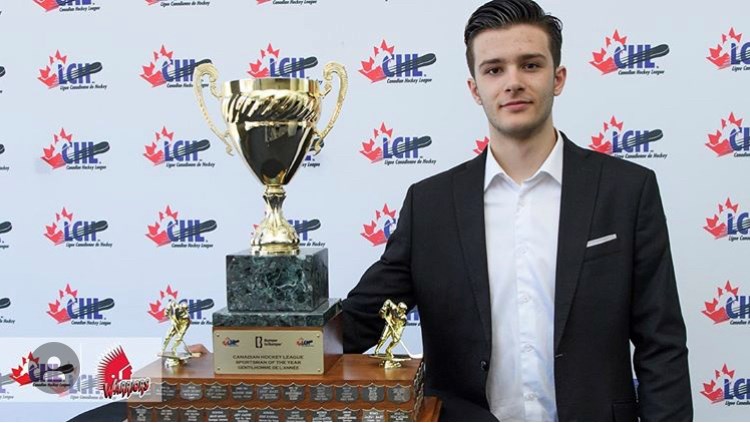 Justin Almeida of Kitimat, B.C. and former Prince George and Cariboo Cougar accepts the national honour as the CHL Sportsman of the Year (via Canadian Hockey League)

Justin Almeida earned a reputation as a class act both on and off the ice during his time with the Moose Jaw Warriors this past season, and now, he has the Canadian Hockey League (CHL) hardware to prove it even further.

The former Prince George and Cariboo Cougar won the Western Hockey League’s (WHL) most sportsmanlike player award last month and on Saturday afternoon (May 25) claimed the CHL’s Bumper-to-Bumper Sportsman of the Year award at a ceremony in Halifax.

“It’s definitely an honour when you win your league, you’re very happy and then when you go up against other leagues and they choose you, it’s a big honour and it’s something I’m excited about,” The 20-year-old said in an interview with the WHL.

Almeida scored 33 goals, 78 assists (the most of any WHL player this year), and 111 points on the season while recording only 14 minutes in penalties.

Incredibly, it was the highest penalty-minute total of his WHL career after taking no penalties in 2015-16 in 48 games with Prince George, only 10 minutes in 2016-17 between the Cougars and Warriors, and 10 minutes total in the Jaw while playing all 72 games in 2017-18.

“I like being on ice as much as I can,” Almeida said when asked about how he maintained such low sin-bin numbers. “I don’t like the feeling of sitting in the box hoping they don’t score on the power-play, so any time I can be on the ice I feel like it’s better for my team.”

It certainly doesn’t hurt that the Kitimat, B.C. product produces points at the rate he does, something the Pittsburgh Penguins noticed when they chose him in the 2018 NHL Draft and signed him to a three-year entry-level deal on Mar. 9.

That’s where Almeida’s focus will be in the coming months as he prepares for his first post-junior NHL training camp while recovering from the recently completed campaign.

“It’s just off-season training right now and getting ready for next season,” Almeida said. “I had shoulder surgery a while back, so I’m rehabbing from that and getting back to 100 per cent and looking forward to next year.”

Altogether, he played 85 games with the Prince George Cougars before being traded midway through the 2016-17 season and went to the B.C. Major Midget Hockey League (BCMML) Finals with the Cariboo Cougars.

Other national award winners from the WHL included:

WHL recognized the sportsmanship of this former Prince George, Cariboo Cougar
May 2, 2019 12:35 PM

Ex-teammate spoils Prince George Cougars’ victory date with Moose Jaw
Jan 23, 2019 2:35 PM
Comments
We welcome your feedback and encourage you to share your thoughts on this story. We ask that you be respectful of others and their points of view, refrain from personal attacks and stay on topic. To learn about our commenting policies and how we moderate, please read our Community Guidelines.