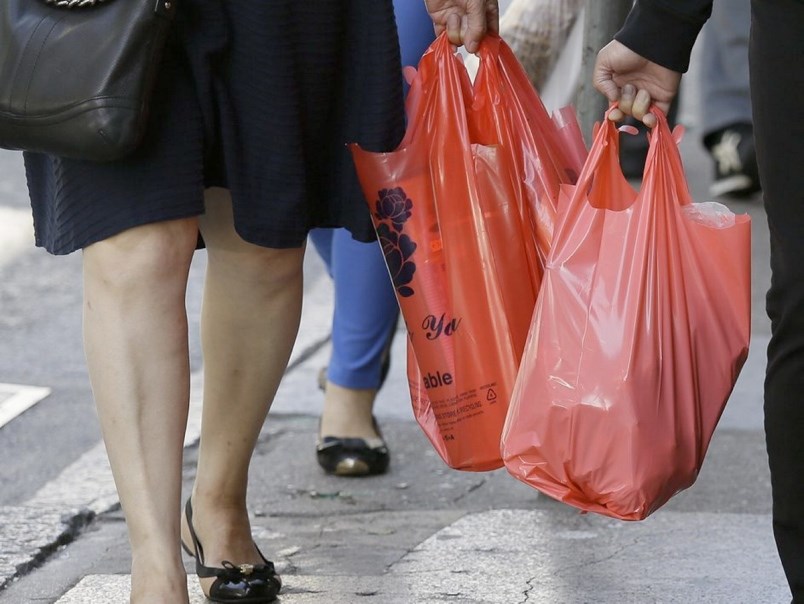 While a plastic bag ban bylaw is still be crafted, a target implementation date has been announced: April 2020.

During today's Kamloops city council meeting, sustainability services supervisor Glen Cheetham told council the aim is to finish public consultations this summer followed by a summary of engagement in the fall. Engagement will centre around a draft bylaw that has already been written.

"We have taken some elements from the City of Victoria's bylaw," Cheetham explained, pointing out that other communities looking at plastic carry-out bag bylaws in B.C. are doing the same, which could create a less complex patchwork of bylaws provincially.

"We've heard from Victoria, in particular, they've had very good compliance," he said, adding a recent study showed 98 per cent compliance. The ban in the province's capital came into effect on July 1, 2018 and while there's been a legal challenge to it, a judge ruled in the city's favour.

The draft bylaw as it stands defines certain things, like precisely what a "carry-out bag" is. Not all plastic bags would be included, like reusable bags and bags for certain items, like bulk items (nuts, vegetables, nails), frozen meats or dry cleaning.

The bylaw also clearly exempts bags that are sold for use in a person's home or business, like garbage liners. There's also an exemption for bags that were bought before the first reading of the bylaw, and another for bags that are returned to the business to be used again.

While council approved moving forward with the draft bylaw and the public engagement component of the matter, councillors did raise concerns around people transitioning in their own homes, as grocery bags and others similar to them are often used for garbage liners.

Coun. Mike O'Reilly pointed out that the Thompson-Nicola Regional District estimates 57 per cent of the plastic carry-out bags in the local dump were reused as garbage bags. City administration noted that garbage does have to be bagged before pickup, for safety reasons.

Cheetham replied that there is currently plenty of plastic bags in the public sphere for now, and that garbage liners will not be restricted.

"There's still going to be an overall reduction," he said. "And this speaks to one of the drivers of the policy — putting a price on waste."

While garbage liners are still plastic bags, Cheetham said they may break down differently, depending on what they're made of.

The discussion also touched on composting organic waste, which reduces the amount and weight of garbage.

"I would like to challenge the public to start composting and find a way to compost," Cheetham said. "Then you produce less wet waste."

Coun. Dale Bass, who was the one behind city administration starting down the bag ban path, said she's glad it's progressing but frustrated with the timeline.

"It's gratifying to see that the administration has adopted a large part of the Victoria bylaw, because that does provide some continuity within the communities that are doing this," she told KamloopsMatters. "I'm frustrated it's going to take longer."

She pointed out that the federal Liberals' announcement they're considering a ban of some sort if re-elected is a sign of wider acceptance of the idea and that it's coming.

"I know most major grocery stores have stopped buying bags, I've been told that by many people," she said. "In fact, I was at a store recently where they thought it was already in place and they weren't giving out bags."

Cheetham, in his presentation to council, also noted that some businesses have already made moves to reduce or give up plastic bags.

A Vancouver market is handing out embarrassing plastic bags to customers
Jun 9, 2019 4:05 PM

Opinion: Trudeau grasping at straws with single-use plastic ban
Jun 11, 2019 7:05 AM
Comments
We welcome your feedback and encourage you to share your thoughts on this story. We ask that you be respectful of others and their points of view, refrain from personal attacks and stay on topic. To learn about our commenting policies and how we moderate, please read our Community Guidelines.