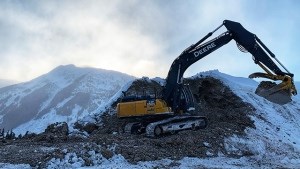 Pipe lay for the Coastal GasLink project will begin this summer in northern B.C., officials say.

Construction on the first two sections of the $6.6-billion project between Groundbirch and McLeod Lake is progressing on schedule, officials said.

The ongoing construction blockade near Houston is not affecting contractors working here in the region.

The Surerus Murphy Joint Venture is building the first two sections of the pipeline.

The right-of-way for the first 92 kilometres to the Brule Mines area is 53 per cent cleared.

The right-of-way for the next 48 kilometres to the McLeod Lake area is 24 per cent cleared.

Blasting will begin at the end of January as part of clearing activities, while crews continue to upgrade roads and bridges in the area and burn brush and other non-merchantable timber.

There were 6,000 metres of pipe stockpiled for the first spread at the end of 2019, with pipe delivery to continue in the Chetwynd area until May.

Pipe delivery to storage sites in the Sukunka area for the second spread of the project will begin in February.

There are currently 225 workers housed at the Sukunka Lodge, which opened in October.

The lodge is a partnership between Black Diamond Group and West Moberly First Nation.

A second camp in the Chetwynd area is planned for an April 2020 opening and will house 670 workers. It's a partnership between Saulteau First Nation and Civeo.

A third camp at Headfall is planned for a June 2020 opening and will house 65 workers. The camp is another partnership between West Moberly and Black Diamond.

There are more than 1,000 workers employed on the project this month, the company says. The company says it has so far spent $4.4 million in the Peace region on local spending and property taxes.