Cats still in playoff contention despite Seattle also winning over Everett
Mar 8, 2020 7:35 AM By: Kyle Balzer 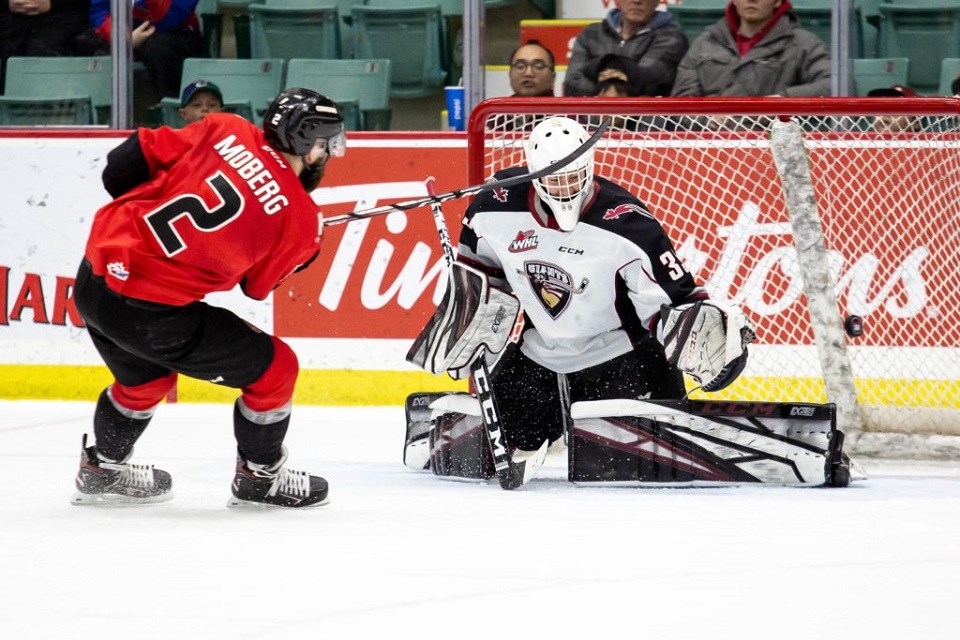 The Prince George Cougars closed out the CN Centre portion of the 2019-20 regular-season with an overtime thriller against Vancouver, winning by a score of 4-3 for their third straight win in four days.

Cole Moberg found a route around the Giants’ defender towards the back of the net with 1:50 left in the extra frame for his 13th of the year.

This was the first weekend doubleheader sweep for Prince George since the beginning of February.

Goaltender Taylor Gauthier made 40 saves on 43 shots from Vancouver, including a game-high 18 in the third period, marking the 10th time this season he’s recorded at least 40 stops.

The Houston, B.C. product put up a goal and an assist in his final home game in a Cougar sweater in front of his parents Brian and Val, like most of his teammates as part of Fan Appreciation Night.

Maser scored the opening goal 6:33 into the first period, then Filip Koffer and Jack Sander each put the puck in the net, getting the Cougars to a 3-0 lead early in the second.

The Giants retaliated with three unanswered goals to tie it up at 3-3 before the final buzzer, setting up Moberg’s game-winner in overtime.

Prince George fans and residents witnessed tribute videos to Mikhalchuk, Maser and Ryan Schoettler in thanking them for their years playing in B.C.’s north.

However, since Seattle prevailed in their match 5-2 over Everett, Prince George is still seven points back of the T-Birds for the final wild-card spot in the WHL’s Western Conference.

Now, the Cougars embark on a six-game road trip to close out the season, starting in Victoria next weekend (March 12-13).