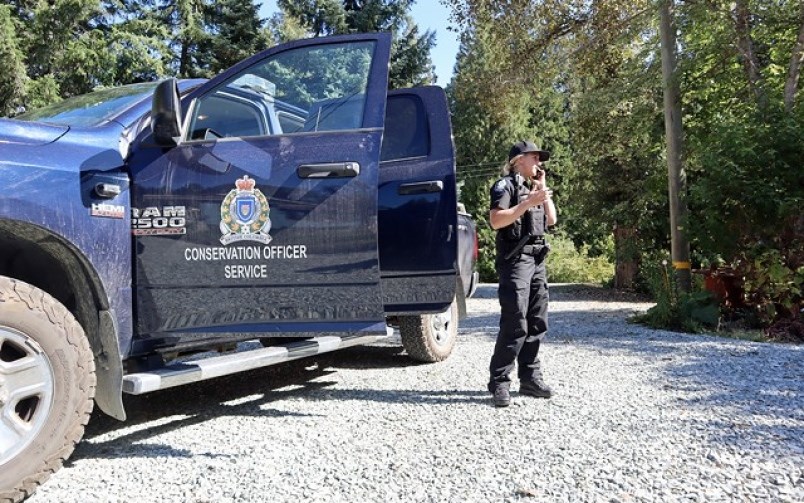 The BC Conservation Officer Service focused on policing attractants across the province over the fall. Sea to Sky conservation officer Brittany Mueller is pictured here, responding to a call at a Pemberton Meadows hobby farm. (via Joel Barde)

The audits began in the summer of 2019 and ramped up in September and October, when black bears fatten up for winter hibernation.

Sgt. Simon Gravel said that while Sea to Sky conservation officers have undertaken similar work in the past, this was the first coordinated provincewide effort.

B.C. conservation officers "allocated more time into proactive audits and enforcement related to attractants for dangerous wildlife," Gravel said, adding that the service worked in coordination with municipalities and the RCMP.

"The objective was to ... (make people) accountable if they leave attractants (out)."

During the audits, conservation officers patrolled neighbourhoods and other areas to ensure attractants were properly secured using bear-proof bins, that excess fruit had been picked from trees and that electric fencing was used around livestock and their food sources.

In total, officers completed 704 inspections throughout the province, laid 76 charges, gave out 301 warnings, and 355 dangerous wildlife protection orders, which direct a property owner to remove an attractant or face a $575 fine.

Here in the Sea to Sky zone of the COS's jurisdiction (North Vancouver to Pemberton), conservation officers distributed 26 warnings, 11 violation tickets, and 17 dangerous wildlife protection orders between Sept. 15 and Nov. 15, 2019.

Lesley Fox, executive director of the Association for the Protection of Fur Bearing Animals (Fur-Bearers), said that she was "elated" to see that the COS is becoming "more proactive" about ticketing.

Fox added that it is a sign that the COS is making progress from past practices.

According to information obtained through a Freedom of Information request by the Fur-Bearers, the COS gave out 33 warnings to clean up attractants and only 12 tickets and fines between Jan. 1 and June 10, 2019.

This despite the fact that COS officers killed 113 black bears in a two-month span between April and May 20, 2019.

Fox remains concerned about the number of black bears being killed by conservation officers — 4,341 have been killed over the past eight years, according to provincial data compiled by Pacific Wild, a wildlife advocacy group for the Great Bear Rainforest.

In Fox's view, it's "outrageous" to believe that those bears all represented a threat to people or property.

"There are many issues that still need to be addressed, but it's a positive first step — that we're finally all coming together to get serious about managing attractants."

Bear-advocacy organizations, including the Fur-Bearers, continue to push for third-party oversight of the COS. More recently, Pacific Wild has called on conservation officers to wear body cams.

Fox said she sees that as a reasonable request. "We definitely support it," she said. "There are fish and wildlife agencies that have done this before.

"I don't think that it is an unreasonable requests for any agency. I think that the public demands it."