Council will host community meeting to get public feedback, ideas for downtown problems
Nov 19, 2019 9:37 AM By: Hanna Petersen 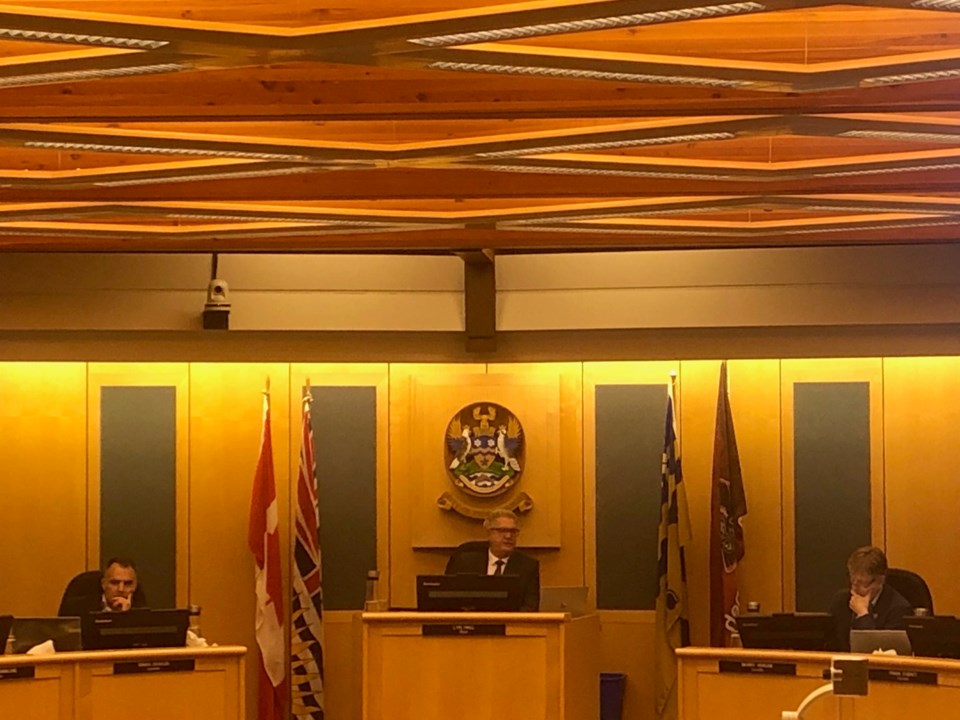 Mayor and council approved a recommendation to hold a community meeting to address downtown issues. (via Hanna Petersen)

While the state of Prince George’s downtown is always hot topic throughout the community, the temperature seems to be rising.

Social media, community radio and online forums have been buzzing with discussions of the city’s downtown issues.

Mayor Lyn Hall and members of council took a moment during last night’s meeting (Nov. 18) to explain the role municipal government, its partnership and work already underway downtown and the next steps to address the issues.

This discussion coincidently followed an outburst from a local business owner in the gallery who shouted at Mayor and council about how businesses are frustrated with downtown and then abruptly left the chambers.

Coun. Kyle Sampson eventually put forward a motion, which came from a strategic planning session, to hold a community meeting that would bring together council, stakeholders and community members to discuss new ideas and strategies to tackle the problem.

“We have an issue, but I will tell you this particular issue has not left anyone’s prevue in three years, said Hall.

"Day in and day out we deal with this issue. It’s not as if we turn a blind eye to it. When we take a look at the downtown issues there are no silver remedies, there’s no golden remedies that are going to create an absolute fix for everything that goes on.”

He says he’s spoken with a multitude of mayors across B.C. dealing with the same problems, who are all trying different solutions to tackle the issues.

“That group of mayors talks about best practices and what we can do to solve pieces of the puzzle and it’s a tough job. Every municipality is suffering with the same issue. Is that an excuse? It’s not an excuse. It’s just the same cold hard facts.”

Coun. Cori Ramsay noted a lot of the work the city is doing is hard for the public to see, noting initiatives like the new poverty reduction committee.

“I think a lot of the initiatives that we are taking on do have a bit of invisibility to them so it is challenging to see the amount of work and resources that are going into this, but it is there and we are working incredibly diligently on this continuously,” said Ramsay. “We are transforming the downtown and it is slow work but it is making a world of difference. “

Coun. Brian Skakun said a meeting about downtown issues is nothing new and there are no excuses for people who do not feel safe downtown.

“Is there a lot of work going on downtown? Sure, but you don’t tell the people that are beat up or mugged or don’t feel safe in their shop that everything we are doing is going to make them feel better because a lot of them don’t.”

Coun. Murry Krause noted both the city and the province are involved in a lot of poverty reduction initiatives at the moment and that poverty is a major contributor to what we are seeing downtown.

“If there were easy answers this would be solved by now and everyone would have a stable life,” said Krause. “I’m not going to throw anyone on the street under the bus because right now their lives are in chaos and it wouldn’t be fair.”

He also noted that he would only be in support of a community meeting as long as everyone feels free and safe to participate.

“It would not be fair to create a meeting where people would be booed or treated like they what they had to say didn’t matter and didn’t feel safe in doing so.”

On the phone from the Non-Profit Housing Association Convention in Vancouver, Coun. Susan Scott added that she’s hearing the exact same issues from every community at the event.

“If we can engage our community to come to a better resolution to what is going on it's not only for our benefit but we can lead the way for our entire province.”

The motion to hold a community meeting where residents can attend or submit a response to the issues affecting downtown Prince George was passed unanimously.