Deer shot with bow and arrow left to suffer in B.C. community 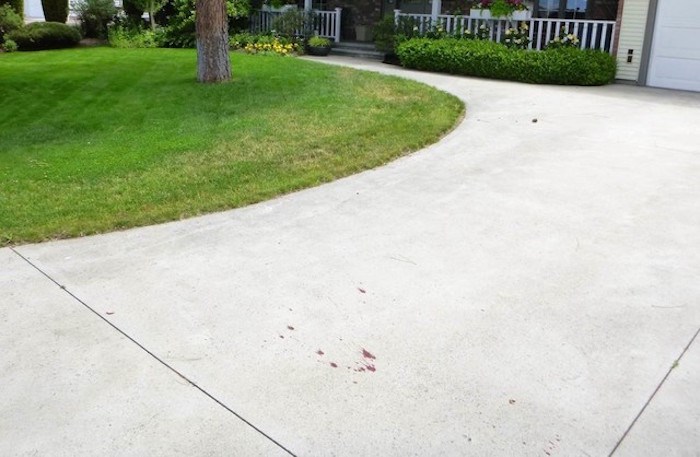 Blood from a wounded deer on a Kelowna driveway. (via Contributed)

Kelowna conservation officers are searching for a deer that has been shot with a bow and arrow and left to suffer.

Conservation officer Terry Myroniuk says he’s been searching for the small buck all morning and believes it was struck with a bow and arrow at about 8:15 p.m on Monday.

“The mule deer was running through someone’s yard and ran through 10 other yards bleeding quite heavily,” he said. “It’s unacceptable.”

Myroniuk said there was a lot of blood through the yards on Carriage Court.

“The deer will be bleeding from the side and possibly also from the mouth,” said Myroniuk. “The deer’s last known location was heading towards the creek.”

Myroniuk says a person who commits this type of offence is liable, on a first conviction, to a fine of $100,000 or imprisonment not exceeding one year. A person who has previously committed the same offence could face a fine of $200,000 and imprisonment under two years.

Anyone who witnessed the person responsible for this illegal act or has seen the deer is being asked to call COs immediately at 1-877-852-7277.