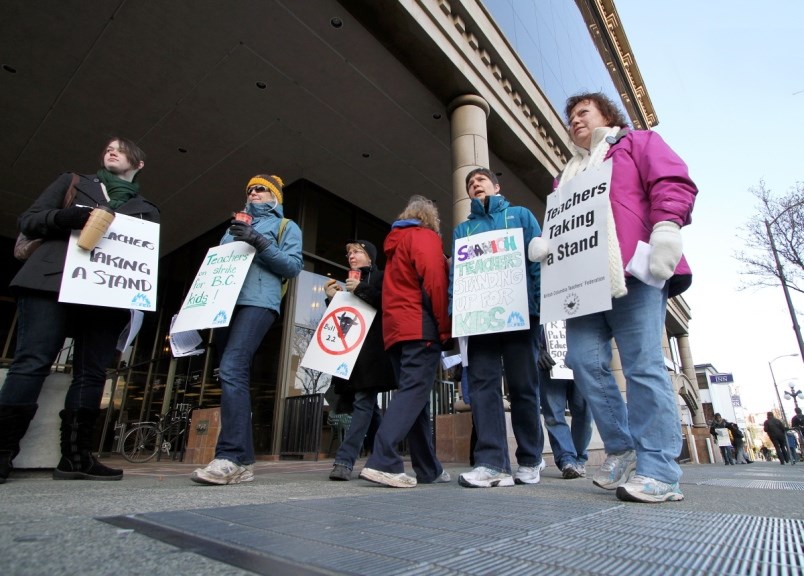 In a file photo from March 2012, teachers picket in front of the B.C. Ministry of Finance building in Victoria. (via Adrian Lam/Times Colonist)

A contract deal between B.C.’s teachers and the employers’ association is nowhere in sight after 67 bargaining days, a Nov. 1 mediator’s report says.

“It is evident there is a disconnect between the parties that will not allow them to reach a collective agreement,” Labour Relations board mediator David Schaub’s report said.

He said the B.C. Teachers’ Federation and B.C. Public Schools Employers’ Association (BCPSEA) have a win-lose approach to bargaining. That must be abandoned in favour of collaboration and problem-solving, Schaub said.

The contract expired in June.

The teachers are looking for a 2% wage increase in each of the three years of a 2019-22 contract.

“This proposal does not bring teachers close to the current national average salary,” an Oct. 12 federation submission to Schaub said.

The sides met for 51 days before the mediator was appointed June 18. He met with the sides for 16 days but no agreements were reached.

Neither side could comment to a media blackout requested by the mediator.

Schaub said only one collective agreement has been reached without government or outside intervention since 1987.

Schaub said the key point of contention is the level of funding for the system. He said the focus should be on the system’s success but added the government also has to balance education budget allocations against items such as health care, transportation, the social safety net and a competitive tax regime.

And, he said, the association has no mandate to negotiate the government’s K-12 budget.

Despite the teachers’ salary increase request, a public sector bargaining mandate only allowing for wage increases of 2% per year is seen as a stumbling block.

Schaub said the teachers have said that mandate “is insufficient to successfully conclude a collective agreement and additional monies need to be made available.”

And, Schaub said, “Stagnating salaries” are “falling well behind the rate of inflation.

“Even at the top of the salary grid, B.C. teachers are the lowest paid of the five western provinces.”

That, he said, has created a teacher shortage, causing remote regions to have classes led by uncertified instructors.

“It is no surprise that districts face challenges in recruitment, especially given that B.C. has some of the highest cost of living in Canada, as well as a housing shortage in many of our communities,” the teachers’ submission said.

He said the association wants standardized contract language provincewide while the federation wants some issues dealt with locally.

“This is seen at the bargaining table as an impediment to reaching agreement on issues,” Schaub said.

The teachers’ submission, however, said such a split on some issues would allow districts to develop processes to best serve unique community needs.

Teachers also want greater aboriginal representation in their ranks, pay for days when weather makes getting to work impossible and compensation for class preparation time.

That means class sizes and competition, non-enrolling teacher ratios and salary improvements have returned to the table as key issues.

Schaub made recommendations based on amendments to the last contract for both sides to take back to members.

DavidsTea closing 82 stores in Canada, all 42 stores in the U.S. market
Jul 10, 2020 4:05 PM
Comments
We welcome your feedback and encourage you to share your thoughts. We ask that you be respectful of others and their points of view, refrain from personal attacks and stay on topic. To learn about our commenting policies and how we moderate, please read our Community Guidelines.