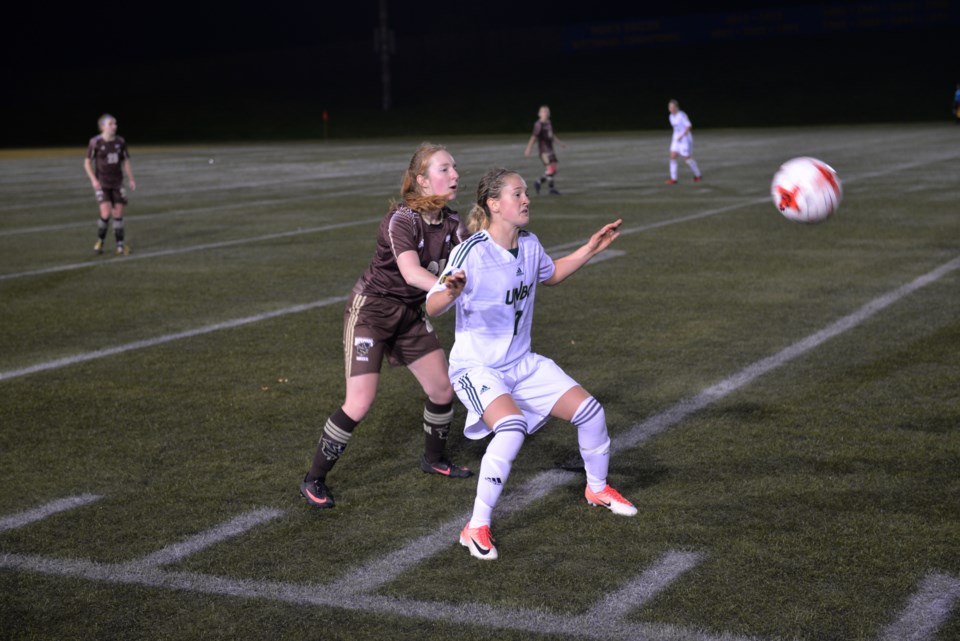 The UNBC women's soccer match on Friday night (Oct. 26) was not for the faint of heart.

The ladies were in Vancouver at UBC for the first round of the Canada West playoffs and matched up against the Manitoba Bisons with a spot against top-seeded UBC Thunderbirds on the line. And this match would have a bit of everything.

The first 45 minutes saw no goals for either side, but the second half was a very different story.

UNBC would strike with 20 minutes left in regulation when Timberwolves regular season points leader and midfielder Paige Payne sent a great corner into the box where defender Mara McCleary was waiting. The centre-back didn't waste the valuable chance and beat Bisons keeper Madison Wilford to put the Timberwolves up 1-0.

But six minutes later, Manitoba would find the equalizer.

UNBC keeper Brooke Molby held her ground before the Timberwolves had a slight defensive lapse which gave Bisons midfielder Hailey Lavarias a golden opportunity and she would capitalize to tie the contest 1-1.

If that wasn't enough drama in a short time frame, overtime was next with both teams still deadlocked after regulation.

The best chance in the extra minutes came from UNBC midfielder Sarah Zuccaro who had a great chance from 18 yards out but her shot would sail just wide. With overtime solving nothing, penalty kicks would decide who advanced.

First up was UNBC's Payne and she would open the PK's beating Wilford. Manitoba's Amanda Wong would pull her shot wide giving the Timberwolves the 1-0 advantage.

UNBC's Hannah Emmond would have her PK sail over the crossbar and the Bisons' Holly Angus would blast one into the top corner, beating Molby.

Timberwolves' Madison Emmond was next to the spot. Wildford would guess the right way, but the shot snuck past her and into the net.

The Bisons' Machaela Burdeny, would fire her shot north of the crossbar which put UNBC in a great spot to advance.

In a very high-pressure situation, UNBC coach Neil Sedgwick would call on the freshman Zuccaro to potentially seal a win for the Timberwolves. She would capitalize, putting a shot just under the crossbar which meant Manitoba had to score to stay alive.

Michaila Pilcher would have her shot stopped by Brooke Molby and the Timberwolves won their first Canada West playoff game in program history.

“It’s crazy. We didn’t think we were going to be here a couple days ago, and here we are winning,” UNBC keeper Brooke Molby said in a press release. “We are through, and everyone is so happy. It is crazy.”

The Timberwolves will take on the top-seeded UBC Thunderbirds on Sunday (Oct. 28) at noon.