Dozens of Prince George businesses need additional $20K to get through COVID-19: survey

More than half claim all three governments levels are not doing enough
Apr 20, 2020 3:45 PM By: Kyle Balzer
Previous Next
1 / 1 Downtown Prince George in November 2018 (via Hanna Petersen).
Expand
Previous Next

Prince George businesses have explained the issues they are facing during the COVID-19 pandemic and it appears the majority of companies are in need of more financial support.

According to a survey conducted by the local Chamber of Commerce (PGCC), it shows several needing up to an additional $20,000 to sustain businesses during the crisis and claim Canada’s Emergency Wage Subsidy, which would provide 75 per cent of a worker's salary or up to $847 per week, will not help maintain staffing levels.

The PGCC had 62 local businesses participate in the survey anonymously, stating their industry and subsequently answering seven follow-up questions centred around what they need, how they believe governments are responding in terms of helping the economy and how much is needed to maintain operations.

Most small- and medium-sized businesses appeared to agree at more than 77 per cent that the city isn’t doing enough, while more than 61 per cent said ‘no’ in the same question for the provincial level and more than 53 per cent with regards to the federal government.

Prince George Chamber of Commerce graph shows most businesses believe the city isn't doing enough to support them during the COVID-19 pandemic. (via PGCC) 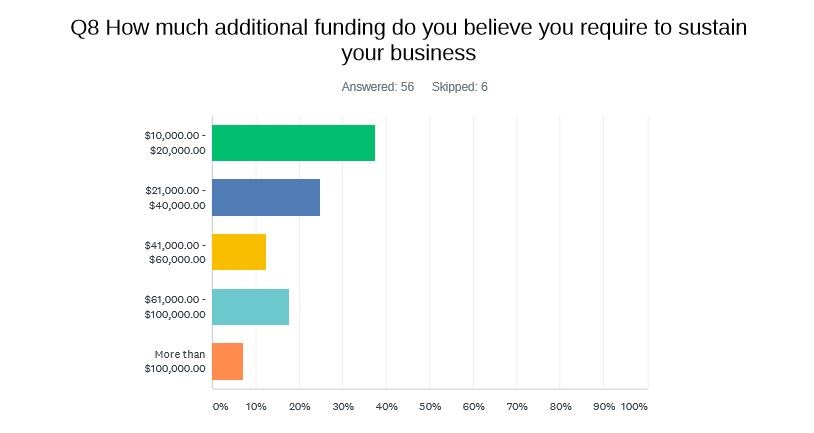 Interestingly, when asked if it would be accessing any additional funds, the majority of businesses either said they wouldn’t at this time (33.87 per cent) or they will apply for a government loan (30.65 per cent).

Chamber CEO Todd Corrigall says a new survey will be released later this week and the same questions will be conducted for more specific programs to participate.

From the PGCC’s first survey, 28 of the 62 businesses classified themselves as ‘other’ industry, while the rest were as follows:

More than half of those businesses also said more support is needed around applying for loans and grants and planning a recovery process for when the COVID-19 pandemic is over. 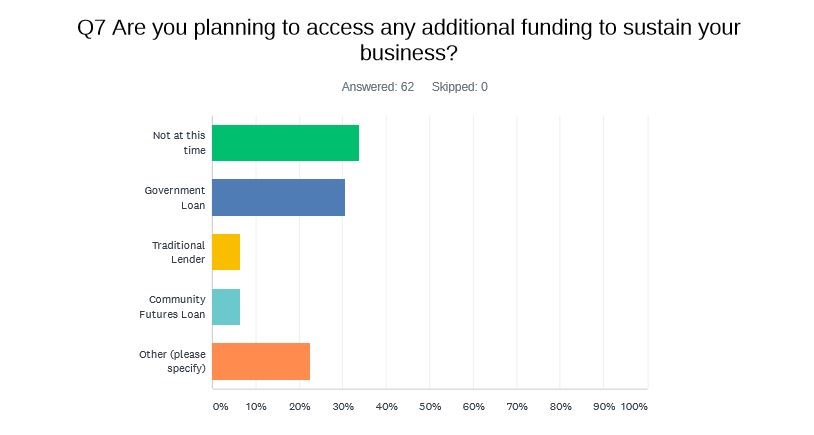 Prince George Chamber of Commerce graph shows businesses that would access additional funds and loans during the COVID-19 pandemic. (via PGCC)