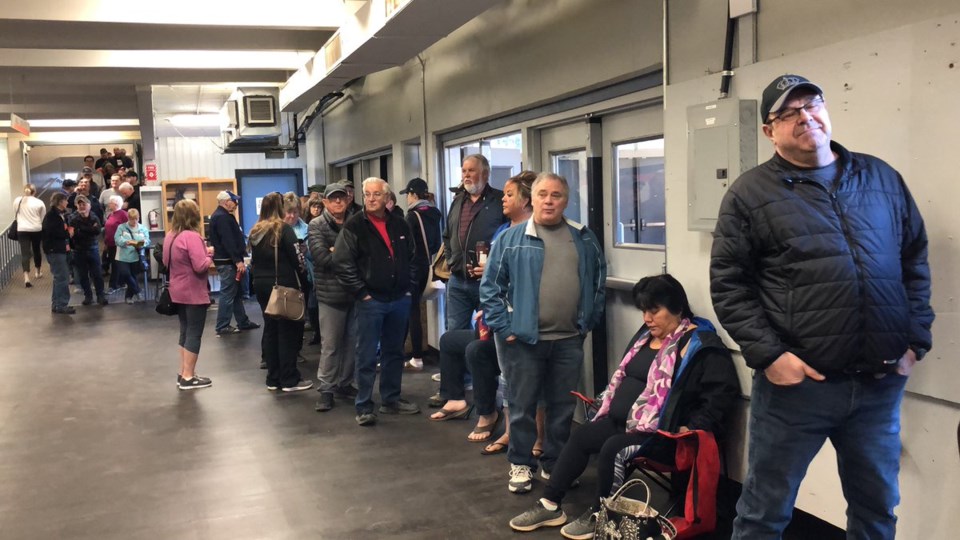 Those are the words of Prince George Spruce Kings fan Douglas Henning, who was first in line for tickets to the 2019 B.C. Hockey League (BCHL) Fred Page Cup Finals at the Rolling Mix Concrete Arena (RMCA) this morning (April 8).

He and his wife Jeanne camped out at the RMCA as early as 7:30 a.m., two-and-a-half hours ahead of when tickets officially went on sale both in-person and via the Spruce Kings’ website.

“I just really wanted tickets,” he told PrinceGeorgeMatters in front of a line of more than 50 people. “Tell you the truth, I was expecting more people when I got here in the morning, but I’m happy to see as many people as there is in this line. I think the Spruce Kings should be in the Finals every year so we can keep doing this.”

Here’s the line-up as of 9:45 & it goes as far as the incline on the ramp to the stands | #CityOfPG @SpruceKings @GoBCHL @PGMatters pic.twitter.com/QaXr93ihlh

Henning has been a supporter of Prince George’s Junior ‘A’ hockey club for more than 10 years, and believes they can earn redemption after losing the Fred Page Cup to Wenatchee last year in five games.

“It’s not that long of a time that I’ve been coming here, but since I have, the organization has been incredible and they do a great job at supporting their fan base and making sure that we have opportunities like this to get excited about the team. Playoff hockey is a great time of year that’s for sure.”

The maximum capacity for the RMCA as per fire safety regulations is 2,112.

The Spruce Kings haven’t had a sold-out crowd in the 2018-19 post-season run thus far, but the two games they hosted in the Coastal Conference Championship against Victoria only had standing room available.

Game One of that series is the only one to eclipse 2,000 people in the arena.

In 2018, Prince George residents packed the stands at 2,112 twice before making the Finals; Game Seven of the Mainland Division Final against Surrey and Game Five of the Coastal Championship against Powell River.

That number was reached again in Games Three and Four of the Fred Page Cup Finals.

Henning explained to PrinceGeorgeMatters it’s the atmosphere that keeps him coming back.

“I love the hype; that’s why I keep coming back. I like the feeling of playoff hockey. It gets really loud, the fans are always into the game, and there’s hardly ever a silent time in [the RMCA] when the Spruce Kings are playing.”

Douglas Henning & his wife (far right) were the first in line to get @SpruceKings’ Fred Page Cup Finals tickets; they’ve been in line at the RMCA since 7:45 a.m. & anticipate a quick run for their home team | #CityOfPG @GoBCHL @PGMatters pic.twitter.com/iDQ3Riq4vf

He said hopes he’ll be able to have good seats next to his wife Jeanne and his grandson when the Spruce Kings lift the Fred Page Cup for the first time in team history.

The Spruce Kings begin that redemption quest for the BCHL title this Friday (April 12) and Saturday (April 13) against the Vernon Vipers, both with 7 p.m. puck-drops.

Here’s when the Prince George Spruce Kings will begin the Fred Page Cup Finals
Apr 5, 2019 7:35 AM

PHOTOS: Prince George Spruce Kings hunt down Grizzlies in Conference Finals opener
Mar 30, 2019 7:35 AM
Comments
We welcome your feedback and encourage you to share your thoughts. We ask that you be respectful of others and their points of view, refrain from personal attacks and stay on topic. To learn about our commenting policies and how we moderate, please read our Community Guidelines.