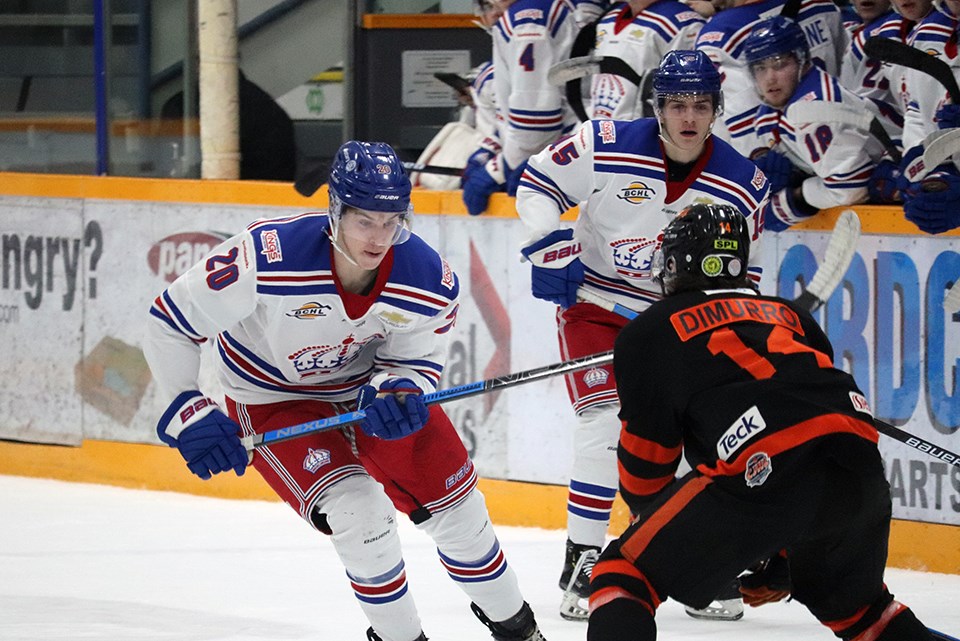 Mason Reeves (#20) in playoff action between the Prince George Spruce Kings and the Trail Smoke Eaters at the Rolling Mix Concrete Arena. (via Kyle Balzer)

The BC Hockey League (BCHL) has unveiled its extended training camp schedule, which is a series of exhibition games between teams in an assigned cohort.

These scheduled to lead into the new 2020-21 season earmarked for Dec. 1 regardless of which COVID-19 return-to-play plan is finalized.

For the Prince George Spruce Kings, they’re set to play eight games, only two of which will be played in the Rolling Mix Concrete Arena, which was closed for public use on July 27 by the city.

The 2019 Fred Page and Doyle Cup champions are slated in the same cohort as the Cranbrook Bucks, the BCHL’s newest franchise, the Merritt Centennials and the Trail Smoke Eaters.

“We believe it’s important to have our players playing meaningful games during this extended period before the start of our regular season, in order to stay engaged and game-ready leading into December,” said BCHL Executive Director Steven Cocker in a news release today (Sept. 18).

“Our teams are working within the guidelines to provide our players with a high level of development on and off the ice.”

The exhibition campaign comes a week after the BCHL unveiled its back-up plan on Sept. 11 to host a 2020-21 season should Provincial Health Officer Dr. Bonnie Henry reject its initial proposal.

Plan ‘B’ includes no fans in the stands instead of a 25 per cent capacity, in addition to financial support from government and sponsorships.

The Spruce Kings’ extended training-camp exhibition games are as follows: