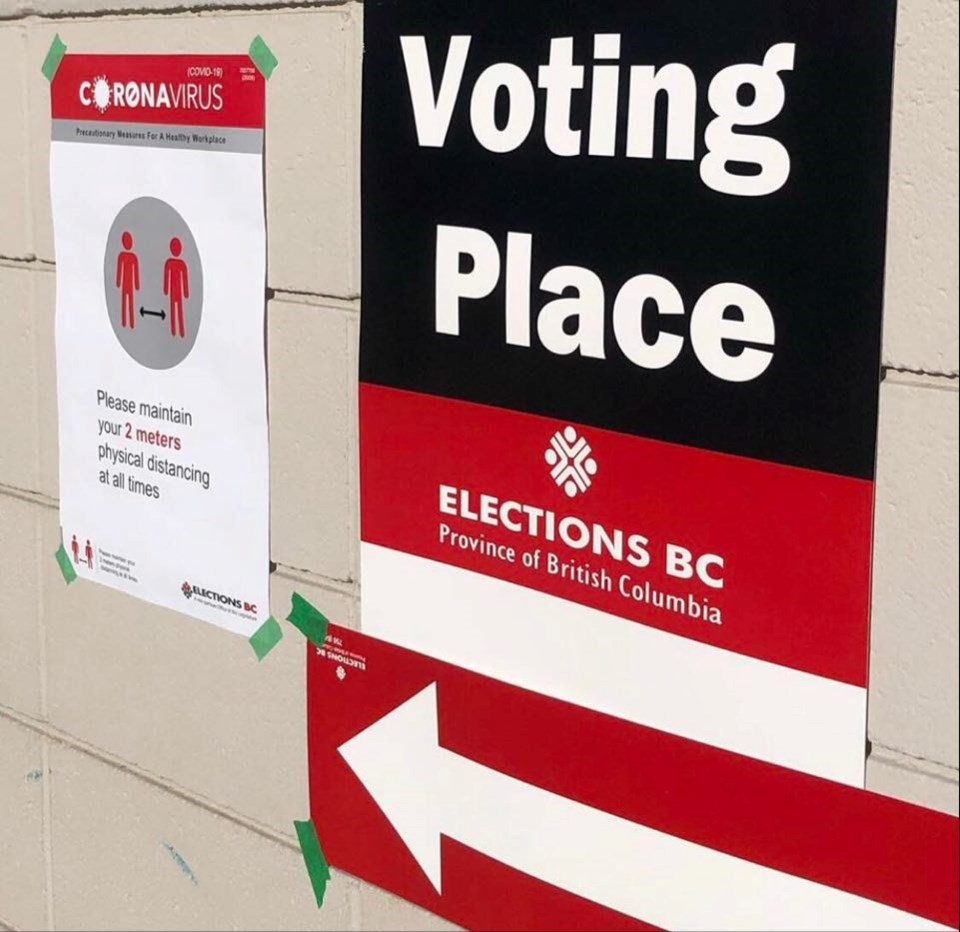 Elections BC voting place. (via Contributed)

Elections BC has updated its voter turnout estimate, saying there was more than two per cent more compared to the original count.

Initially, the estimated voter turnout announced on Oct. 26 saw 52.4 per cent of registered voters cast a ballot. But a new estimate today (Nov. 20) through an interim statement of votes available, it has risen to 54.5 per cent.

The final numbered of registered voters that participated on Oct. 24 will not be available until the full post-election processing is complete since those who want to participate can register on general voting day.

Elections BC added 724,279 vote by mail packages were requested this year amid the COVID-19 pandemic and 596,287 were actually returned which is an 82.3 per cent return rate.

Current date released by Elections BC by the voting method is as follows:

Final count for the 2020 Provincial General Election is complete in every electoral district in the province. Read more: https://t.co/S0PYUuyJkL #bcpoli

The BC NDP won a majority in the legislature with the BC Liberal Party the official oppostion.

In Prince George-Valemount, BC Liberal Shirley Bond has officially won a sixth term in Victoria, claiming 55.62 per cent of the popular vote. She finished with 9,703 votes.

The other results in the riding were as follows:

“It's a very humbling experience to be elected once much less six times by the people of Prince George-Valemount. I’m very grateful and obviously a very emotional night for me and my family,"

BC Liberal incumbent Mike Morris will now serve his third term as the MLA for Prince George-Mackenzie after claiming 50.80 per cent of the popular vote. He finished with 8,543 votes.

"It's very humbling once again to be supported by so many people in Prince George –Mackenzie, hopefully, I won’t disappoint them sitting as an opposition member for the next four years," Morris also told PrinceGeorgeMatters on election night.

"I’d still like to make it clear to the folks in the legislature that we have issues with up here with forestry, I’d like to see a diversified economy from the resource sector take place. I’d like to see a petrochemical industry come forward here so I am going to be aggressively pursuing those things for the central interior and for British Columbia."

The other final results in the riding were as follows:

- with files from Kyle Balzer and Hanna Petersen, PrinceGeorgeMatters, and The Canadian Press

'It is not something I am considering': Projected Prince George-Valemount MLA Shirley Bond will not seek BC Liberal leadership
Oct 27, 2020 4:15 PM