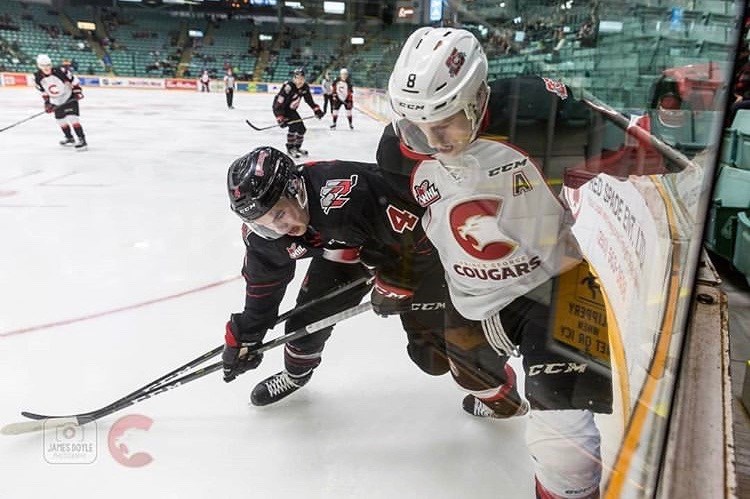 For a second consecutive game, 60 minutes didn’t solve anything between the Prince George Cougars and their opponent.

Tuesday night’s game saw the home team fail to hold onto a 2-0 lead, eventually losing in overtime by a score of 3-2 on a comeback by Moose Jaw.

The game-winner was scored by Justin Almeida 30 seconds into overtime, who was traded from Prince George to the Warriors in January 2017 in exchange for Nikita Popugaev.

The Russian eventually left the Cougars to play professional hockey in his home country.

The single point allowed Prince George to earn six points in the six-game homestand with a record of 2-2-2.

Ilijah Colina and Vladislav Mikhalchuk scored the two goals for the Cougars in the first and second periods respectively.

Tristin Langan and Jett Woo, also a Vancouver Canucks prospect, tallied for Moose Jaw in the second and third periods before winning in overtime.

Cougars forward Josh Maser did not play Tuesday night as he’s been suspended by the Western Hockey League (WHL) for three games following an incident in Sunday’s match with Kamloops.

Prince George’s record now drops to 16-24-3-2 in a tie for fourth in the BC Division and two points back of a wild-card spot.

They’ll continue with a brief two-game road stint to Kamloops (Feb. 1) and Vancouver (Feb. 2) before returning home Feb. 5 and 6 when the BC Division-leading Giants make a visit.

Raiders roll over Cougars in third-period outbreak
Jan 17, 2019 9:35 AM
Comments
We welcome your feedback and encourage you to share your thoughts. We ask that you be respectful of others and their points of view, refrain from personal attacks and stay on topic. To learn about our commenting policies and how we moderate, please read our Community Guidelines.