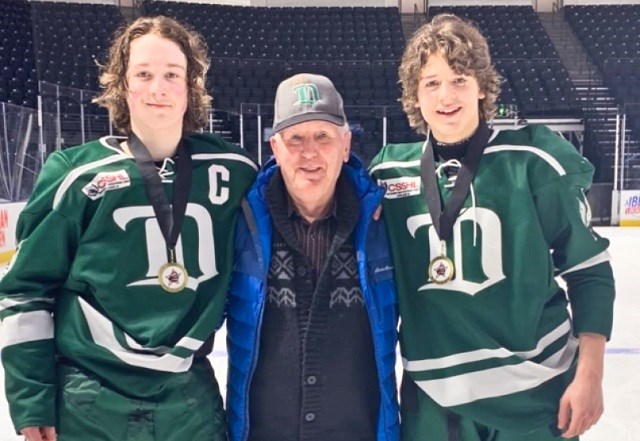 Caden Brown (left) and cousin/teammate Ethan Semeniuk with their grandfather Metro Semeniuk in Kent, Washington after they won the WHL U.S. Challenge Cup with Delta Hockey Academy. (via Tannis Brown)

Caden Brown was born and raised in Fort St. John and prefers the small town to a big metropolis, so playing in Prince George could be the perfect middle ground.

The Cougars’ selected Brown as their second pick in the first round of the 2020 WHL Bantam Draft this week after a stellar season with his (successful) bantam Delta Hockey Academy team.

What will soon come full circle for the 15-year-old will be not only getting to suit up for a major junior franchise, but to also play in front of ‘tons’ of family.

“I had no idea, I was just hoping to get drafted,” Brown said in an interview with PrinceGeorgeMatters about his 17th overall selection.

“I was just watching and waiting for my name to be called. [...] My Mom was very happy and our phones instantly blew up because we’ve got tons of our family in Prince George. They were so excited to see that they’ll have someone from the family play for the Cougars. It was a pretty special moment.”

He explains when he came to visit his father’s side of the family in the northern capital in his younger years, they went to Cougar games when the opportunity presented itself.

Now that Brown’s in the Cats’ farm system, and after finishing up another season in Delta next year, he wants to get back to the north and into a red, white and black sweater quickly.

“My goal is to make the Cougars as fast as I can and as soon as possible [...] In my opinion, I think it makes it a better connection if you have a couple of regional players, but at the end of the day, it really doesn’t matter where you’re from.”

Brown admits the move to the lower mainland and into a larger hockey market was tough, but ultimately, the decision was made for the opportunity to develop his skills and gain more attraction.

Turns out, the family moving down with the forward was worth it in earning Delta Bantam Green captaincy, scoring 65 points in 30 games in his 2019-20 campaign, including 35 goals, and lifting the inaugural WHL U.S. Challenge Cup trophy in early March.

“I think we had a great team this year, a great group of guys too,” said Brown.

“I didn’t have to deal with too much as captain; there wasn't too many problems and it was just fun here. Winning the U.S. Challenge Cup was definitely the highlight of it all.”

I’m very honored to have been selected by @PGCougars today! Can’t wait to get started on this journey and earn my spot in this great organization. https://t.co/YQuKVrjNJ5

Cougars’ Scouting Director Bob Simmonds says he was thrilled to pick the Fort St. John product as early as they did as he followed Riley Heidt, Prince George’s first pick at second overall during Wednesday’s (April 22) online draft.

“Caden is an elite level scorer, who plays a hard, heavy game. He’s a northern B.C. kid who has ties to Prince George and is very familiar with the community. We were thrilled to draft him and he’s the perfect complement to Riley Heidt."

Brown calls himself a very competitive player and also believes his time as a captain can be beneficial for Prince George down the road as his love of the game motivates him to get out of bed each day.

“I’d call myself a power forward; I’m physical, I like to score, I like to go down low in the offensive zone [...] Putting in the amount of effort that I do into the game makes me happy. I feel like I take pride in that.”

Delta Hockey Academy had just finished the round-robin portion of the CSSHL’s playoff tournament before the season was cancelled by the COVID-19 pandemic.

Brown plans to work out as much as he can until the time comes to lace up the skates again.