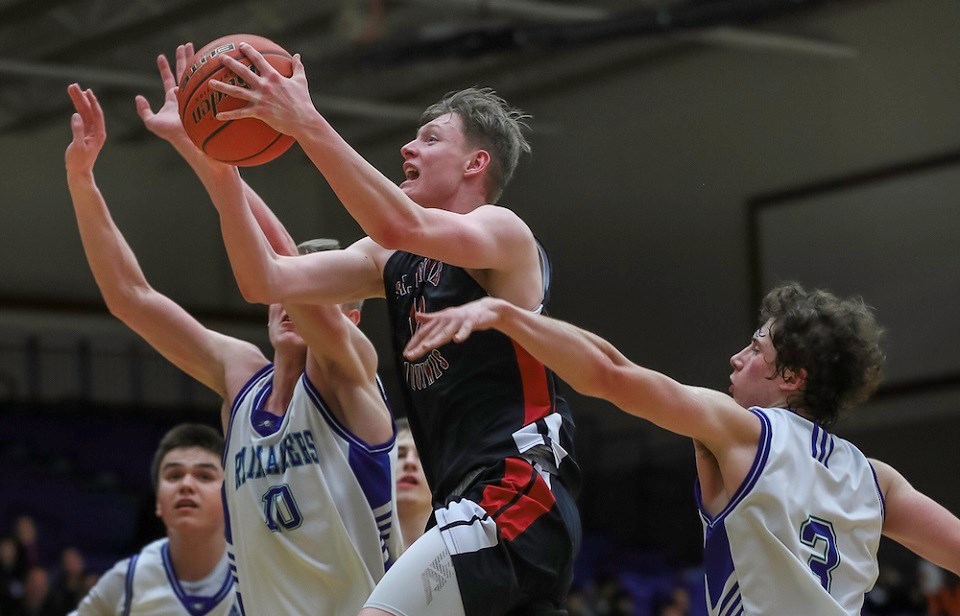 Those are words that could be used to describe the first recruit of the next generation of UNBC Timberwolves as its men’s basketball squad looks to bolster its forward class for the 2021-22 season.

Rory Goodwin comes out of North Vancouver standing six-foot-four and was a two-time provincial all-star that puts up impressive numbers in whatever position he’s called upon.

“The fans can expect me to leave everything on the court,” the 17-year-old explained in a team release this morning (Feb. 22) in officially committing to the Prince George post-secondary.

“I play with 110 per cent, and I never give up. I like to play a team game and get my teammates involved, and I like playing with energy and making highlight plays.”

Going back to the 2019 season pre-COVID-19, Goodwin was one of the most consistent athletes on B.C.’s stage, averaging 24 points, 12 rebounds, six assists and 1.5 steals per game with St. Thomas Aquinas Secondary, where he’s set to graduate in June.

The Fighting Saints lost in the 2020 'AA' final to King George, but Goodwin’s status and ability had them ranked first ahead of 2020-21 despite no competitive games.

“He will add some real flexibility to our lineup,” said UNBC Head Coach Todd Jordan, noting Goodwin’s hard work in the littlest of circumstances made a big difference in separating his talent from the rest.

“He can play two or three different positions and has shown the ability to make really good decisions off the dribble. He’s an extremely hard-working guy with a great mindset, and I think he has the potential to develop into a very good player in his time here at UNBC. This is a good day for us.”

Regardless of where on the hardwood he plays, Goodwin hopes to excel at Canada’s highest-level of university sport, should COVID-19 allow a season this year.

“Basketball, for me, has always been an escape from everything. Somewhere where I can just be free. I love the pace of the game and the close games we have. I love it being something I can dedicate myself to, and that I can strive to get better at every day. I love the relationships you build with teammates and coaches.”

Off the court, Goodwin plans to pursue history and political science in the UNBC classroom.

He’s scheduled to join the T-Wolves for training camp in August.