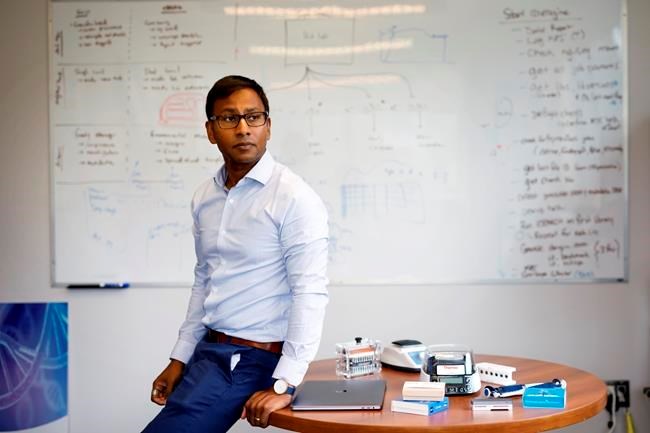 Jessica Burleson shuns all animal protein except wild-caught fish. So when she pays a premium for her seafood, the Winnipeger wants to know with certainty that somewhere along the supply chain it wasn't swapped for a farmed or less expensive species.

That's why she signed up to help test technology from Guelph, Ont.-based LifeScanner, aimed at helping consumers determine if the products they're buying are legitimate.

LifeScanner and other developers of low-cost food fraud test kits believe they're tapping into a large market and plan to grow their services into apps and other features.

"People care about food," said Sujeevan Ratnasingham, principal investigator at LifeScanner, which makes kits for people to collect samples of animal or insect tissue to be tested for identification using DNA barcoding technology.

LifeScanner sells kits in sets of two or four for about $31 or $50, respectively. The cost includes the kit, delivery to the lab and testing. Results are available about two days after the sample arrives at the lab and the customer receives a detailed report, including a description of the species and where in the world it can be found.

Burleson first learned about the technology a few years ago when she saw a callout for citizen scientists to test products at their local grocery stores through a LifeScanner and SeaChoice partnership to help determine how much incorrectly labelled seafood is sold in Canada. She signed up without hesitation.

"Wild sockeye salmon is a little bit expensive and that's OK for me if I'm getting what I want, if it's what it purports to be," said the 52-year old.

"I do eat fish and I'd like it to be exactly what I'm reading on the label."

In April 2017, Burleson tested two types of fish — wild-caught salmon and sole — from her local Costco, and was happy to learn they were exactly as labelled. She repeated the process this past May with several sole samples from the same store and was once again pleased with the results.

Mislabelling of fish products is common due to a complicated supply chain as well as fraudsters who mask lower-cost fish as more expensive fillets. A 2017 LifeScanner-SeaChoice study showed more than one of out 15 products sampled was mislabelled.

An Oceana Canada study released in the summer of 2018 found 44 per cent of fish sold at retailers and restaurants in five Canadian cities were mislabelled — with snapper, yellowtail and butterfish consistently misidentified in the tested samples.

While these types of initiatives make up part of LifeScanner's customer base, another chunk comes from folks who want to know for themselves.

The bulk of samples come from fish, followed by exotic meat such as alligator or kangaroo.

The tool is designed to test the restaurant or grocery store where the person bought the product, as well as the broader supply chain.

"If you know you've been duped, then you can take action," Ratnasingham said.

"You can change your purchasing practices. You can approach the grocery store and say, 'I need to be sure. What can you do to help me be certain?'"

Burleson has not purchased a kit yet to conduct a test outside of the citizen science experiments, but thinks she may in the future.

That would allow her to test items from the other grocery store she frequents rather than just Costco, which the researchers chose for her.

If Burleson learned the quality products she's paying for were actually something different, "it would have been disappointing," she said, "and I would have stopped buying it. Immediately."

Once LifeScanner garners a critical mass of users, it plans to make food fraud results available to the public through an app.

It hopes to add results to restaurant reviews on a service like Yelp or TripAdvisor, said Ratnasingham, as well as through an in-house app for grocery stores, which don't tend to be reviewed on third-party platforms.

"There is a gap that needs to be addressed."

LifeScanner already offers a scaled-down version of this on its website. A map shows dozens of stores where consumers tested products in the SeaChoice partnership and identifies their labelling practices as good, OK, unsatisfactory, poor or mislabelled.

IBM also sees opportunity in this area. Its researchers are working to develop an artificial-intelligence assisted "tongue" dubbed Hypertaste that could quickly identify liquids.

The company believes both consumers and industry players could benefit from this technology.

Individuals would have to be very concerned about what they're consuming to purchase this kind of a device, said Patrick Ruch, an IBM research staff member.

"This could be people buying, for example, expensive bottles of wine that want to make sure that they're not being tricked," he said.

But the company is also "in discussions with many different types of industries," he said, though he couldn't give details as these talks were in the early stages.

The technology could be used to determine if ingredients have been added to dilute milk, for example, or to see if drinking water is safe.

What excites Ruch about the project is "the seemingly unlimited potential" for the technology.

This report by The Canadian Press was first published Oct. 6, 2019.

BCNU wants WorksafeBC to add COVID to list of job hazards
Jul 11, 2020 11:05 AM
Comments
We welcome your feedback and encourage you to share your thoughts. We ask that you be respectful of others and their points of view, refrain from personal attacks and stay on topic. To learn about our commenting policies and how we moderate, please read our Community Guidelines.