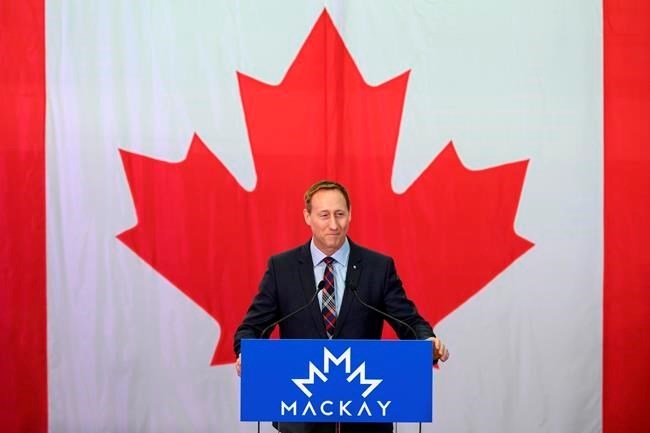 Former federal cabinet minister Peter MacKay says he will run for the leadership of the federal Conservative party.

MacKay made the announcement at the Museum of Industry in Stellarton, N.S., in front of a Canadian flag and before a crowd of supporters bearing signs with his name.

He says he is running because the current Liberal government is making the lives of Canadians harder and he doesn't want to stand by and hope someone else can get the job done.

MacKay served in a number of positions under prime minister Stephen Harper and was the leader of the Progressive Conservative Party when it merged with the Canadian Alliance in 2003, creating the current Conservative party.

He stepped away from politics ahead of the 2015 election, the year the Harper Tories lost power and Harper himself resigned as leader.

Current MP Erin O'Toole is expected to launch his bid on Monday.

Pierre Poilievre, the Tory finance critic, announced Thursday that he's not running for the leadership, citing the burden it would place on his family.

Class-action lawsuit alleges meat packer failed to take COVID-19 precautions
Jul 11, 2020 8:05 AM
Comments
We welcome your feedback and encourage you to share your thoughts. We ask that you be respectful of others and their points of view, refrain from personal attacks and stay on topic. To learn about our commenting policies and how we moderate, please read our Community Guidelines.