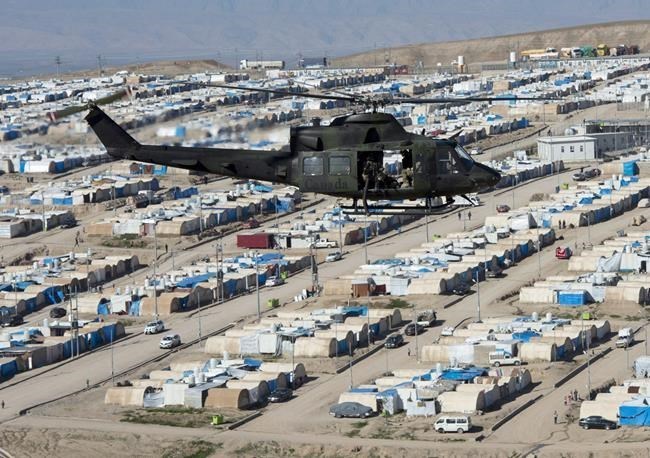 Canadian Forces Maj.-Gen. Dany Fortin knows his way around a modern-day war zone as well as any Canadian soldier. He commanded NATO's training mission in Iraq and led Canadian soldiers in Afghanistan at the height of the fiercest fighting there.

But now he's undertaking what many Canadians would regard as his most important mission — leading the logistical rollout of a COVID-19 vaccine on their home soil.

Prime Minister Justin Trudeau named Fortin on Friday to lead the Canadian military in its role co-ordinating logistics for distributing a COVID-19 vaccine across the country, when one is ready.

The announcement followed days of criticism over the Trudeau government's vaccination strategy and uncertainty about when Canadians might have access to an eventual vaccine.

The country couldn't be in better hands with Fortin leading the vaccine distribution, said his former boss, Andrew Leslie, a retired lieutenant-general who was the Canadian Army commander when Fortin was the chief of staff of Canada's Kandahar task force more than a decade ago.

But Leslie said the government should have mobilized the military for its vaccine rollout far sooner.

"Quite frankly, this all should have all been organized months ago. But that's not the Armed Forces' fault," Leslie said in an interview Friday.

"I'm sure the Armed Forces will do the very best they can. And Dany's going to do a great job. But it's all hands on deck right now."

Leslie entered politics in 2015 to run as a Liberal for Trudeau as a marquee candidate. He was never appointed to a full cabinet post and he decided not to run again in the 2019 federal election.

Defence Minister Harjit Sajjan said in a statement that the military has played a role in Canada's response to COVID-19 all along. "Since the beginning of the pandemic, the Department of National Defence and the Canadian Armed Forces (CAF) have been supporting Canadians," he said.

Fortin most recently served as the chief of staff for the Canadian Joint Operations Command. He was also commander of the NATO military training mission in Iraq from November 2018 until late last year. That followed several leadership posts in Afghanistan the previous decade, and on NATO and United Nations missions to Bosnia in the 1990s.

Leslie said Fortin led an "extraordinarily successful" mission to Iraq and there is likely no better military commander to shepherd Canada's peacetime rollout of a COVID-19 vaccine across a vast, sometimes remote country.

"He is quietly tough, extraordinarily competent, a really good mix of attention to detail and ability to keep the big picture in mind," said Leslie.

“Doesn't get flummoxed under pressure. He's a combat veteran. He's really good with people — not only uniformed people, but people writ large," he added. "He can make the tough calls, but he's a consensus builder.”

Fortin has held the trust of the Prime Minister's Office while amassing important experience dealing with public servants and the provinces, particularly in the "emergency preparedness realm" in Quebec and in Ontario, said Leslie.

Fortin will lead a new national operations centre within the Public Health Agency of Canada. He will be joined by two brigadier-generals and about two dozen other military personnel.

“These CAF members will strengthen plans by introducing risk-mitigation tools and by facilitating a series of exercises in advance of the rollout,” the Forces said in a statement.

Trudeau said Fortin will working closely with public health officials "on logistics and delivery of this greatest mobilization effort Canada has seen since the Second World War."

Trudeau said the Forces will also help meet challenges such as the “cold storage requirements” needed for some of the potential vaccine candidates as well as data sharing, and helping reach Indigenous and rural communities.

“Canada is well prepared for large-scale rollouts of vaccines,” Trudeau said. “We must reach everyone who wants a vaccine, no matter where they live.”

In a December interview with The Canadian Press from Iraq, Fortin emphasized the need to train security forces to protect Iraqis no matter where they lived.

"We’ve all observed a resurgence of Daesh as an insurgency, going back to the desert, going back to guerrilla warfare roots," Fortin said, adding that the Iraqi government and military was learning to chase down the terrorists in all corners of the country "to ensure there is no ungoverned space where they can thrive and pose threats to the people of Iraq.”